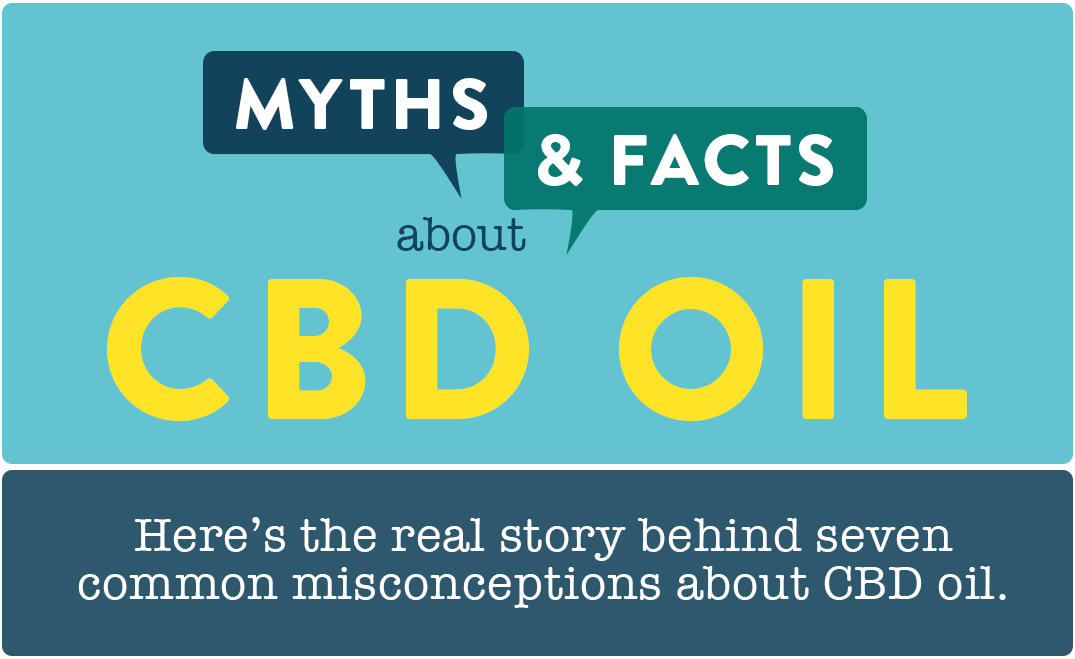 Mention cannabidiol (CBD) oil, which contains CBD extracts from the cannabis plant, and you’re bound to get an earful from your best friend, friends of friends, even your hairdresser about the risks and benefits. It seems everybody’s an expert. We’ve dissected eight common CBD oil misconceptions to arm you with the facts.

Fact: CBD isn’t harmless. CBD can interact with certain drugs, making them more potent or less effective than they should be. CBD inhibits CYP3A4 and CYP2D6, two enzymes that help the body metabolize certain drugs. As a result, CBD has been shown to interact with medications, such as calcium channel blockers, benzodiazepines, cyclosporine, sildenafil, antihistamines, haloperidol, antiretrovirals and statins, such as atorvastatin and simvastatin. It may also increase the blood concentration levels of selective serotonin reuptake inhibitors (SSRIs), antidepressants, antipsychotics, beta blockers, opioids, including codeine and oxycodone as well as warfarin, a leading blood-thinning medication. 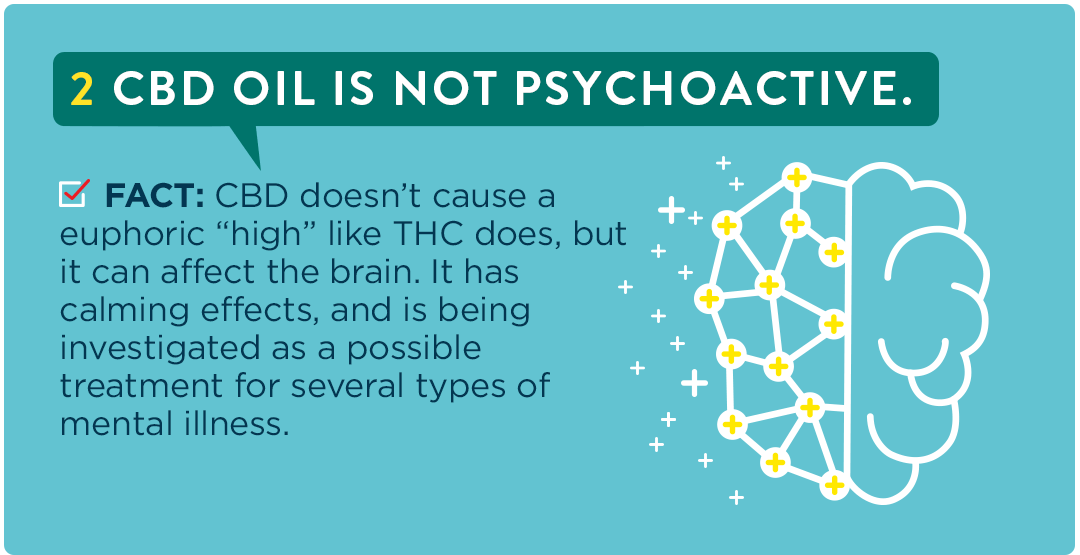 2. CBD oil is not psychoactive

Fact: While CBD doesn’t cause a euphoric “high” like its sister cannabinoid, tetrahydrocannabinol (THC), it can affect the brain and the nervous system. Research suggests CBD may reduce symptoms of psychosis, anxiety and depression, and investigators are also looking into whether CBD may be effective in psychiatric disorders including posttraumatic stress disorder, anxiety, depression, schizophrenia and addiction. 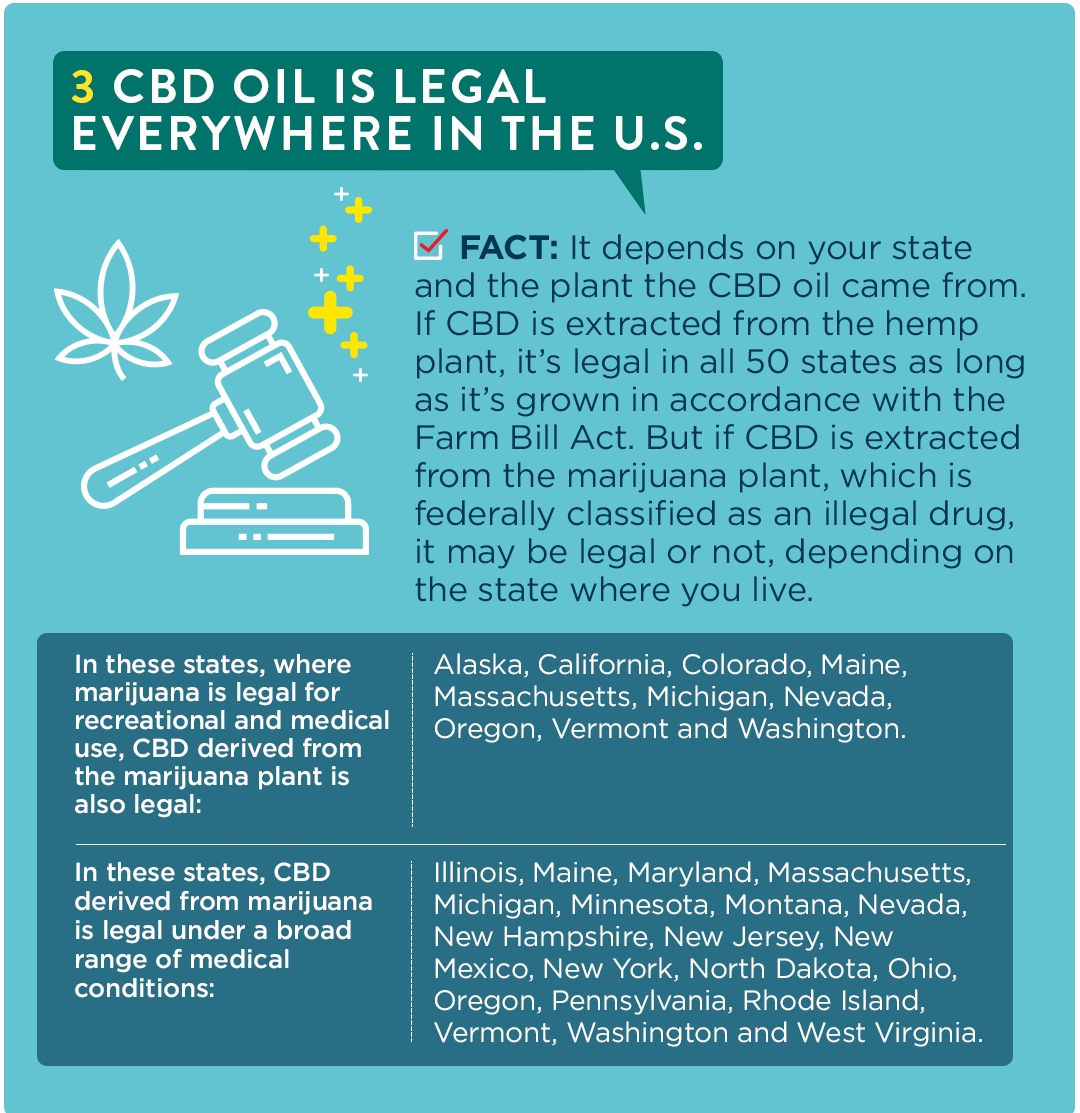 3. CBD oil is legal everywhere in the U.S.

Fact: It may not be legal, depending on where you live and the origin of the CBD oil. CBD oil can be extracted from the hemp plant, officially defined in the 2018 Farm Bill Act as a cannabis plant that contains less than .3% THC. Previously, hemp plants were classified as a Schedule 1 controlled substance, and could not be grown legally. Now, CBD extracted from hemp is legal in all 50 states as long as it’s grown in accordance with the Farm Bill Act.

But CBD from the marijuana plant is still a Schedule 1 drug under federal law, and may or may not be legal depending on the state where you live.  It is legal in Alaska, California, Colorado, Maine, Massachusetts, Michigan, Nevada, Oregon, Vermont and Washington. It is also legal under a broad range of medical conditions in Alaska, Arizona, Arkansas, California, Colorado, Connecticut, Delaware, Florida, Hawaii, Illinois, Maine, Maryland, Massachusetts, Michigan, Minnesota, Montana, Nevada, New Hampshire, New Jersey, New Mexico, New York, North Dakota, Ohio, Oregon, Pennsylvania, Rhode Island, Vermont, Washington and West Virginia.

CBD oil derived from marijuana is illegal in Idaho, Nebraska, and South Dakota.

For more information about the legality of CBD oil in your state and specific regulations for medicinal use, visit Guide to CBD.

Fact: While it may be true that highly concentrated CBD oil has been (illegally) touted as a potential cancer cure, the research isn’t there yet to support that claim. CBD hasn’t been evaluated in any clinical trial for anticancer activity or safety, according to the National Cancer Institute. Highly concentrated CBD oils also have the potential to increase the toxicity or decrease the effectiveness of cancer therapies. 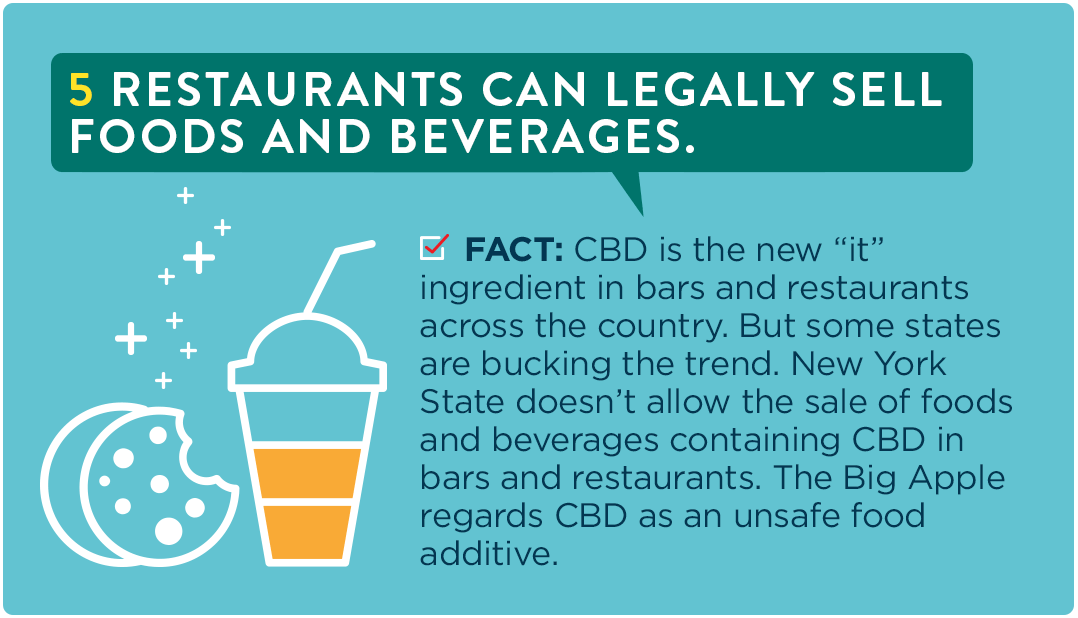 Fact: From cakes and cookies to smoothies and cocktails, CBD is the new “it” ingredient in bars and restaurants across the country. But some states are bucking the trend. New York State, for example, banned the sale of foods and beverages containing CBD.  In the Big Apple, CBD is considered an unsafe food additive. 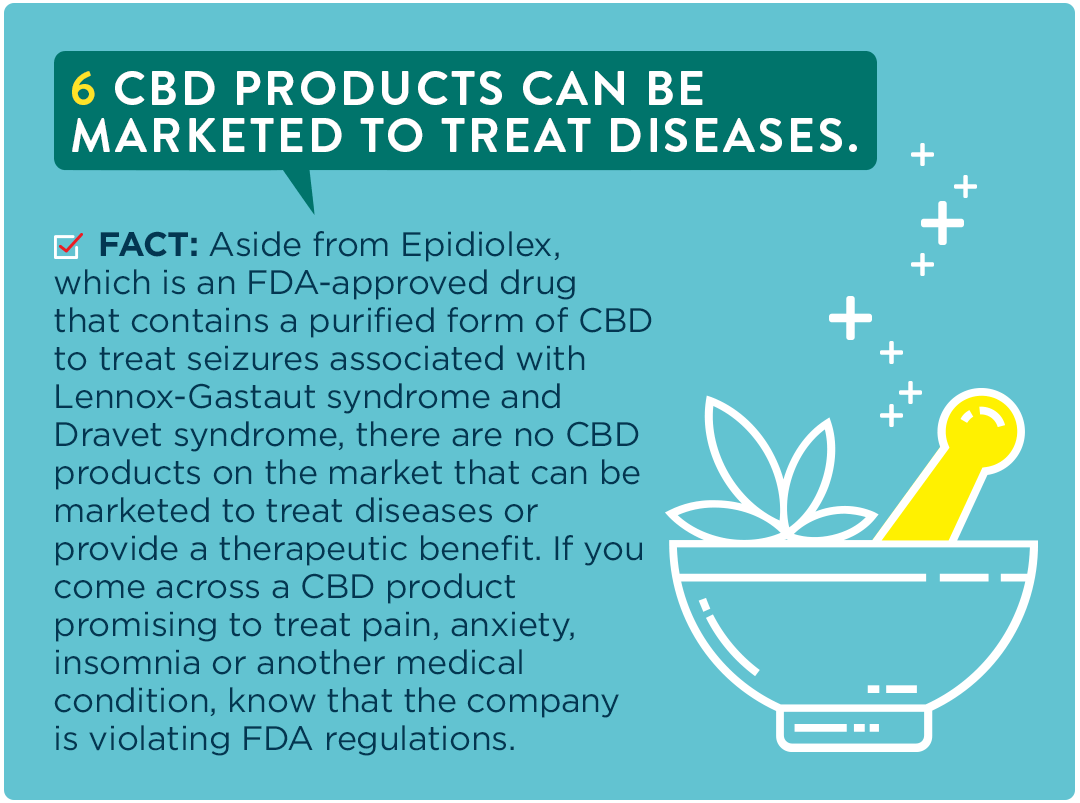 Fact: Aside from Epidiolex, which is an FDA-approved drug that contains a purified form of CBD to treat seizures associated with Lennox-Gastaut syndrome and Dravet syndrome, two rare forms of epilepsy in people 2 years and older, there are no CBD products that can be marketed to treat diseases or provide a therapeutic benefit. Buyer beware. If you come across a CBD product that promises to treat pain, anxiety, insomnia or another medical condition, know that the company is violating FDA regulations and the claim hasn’t been proven. 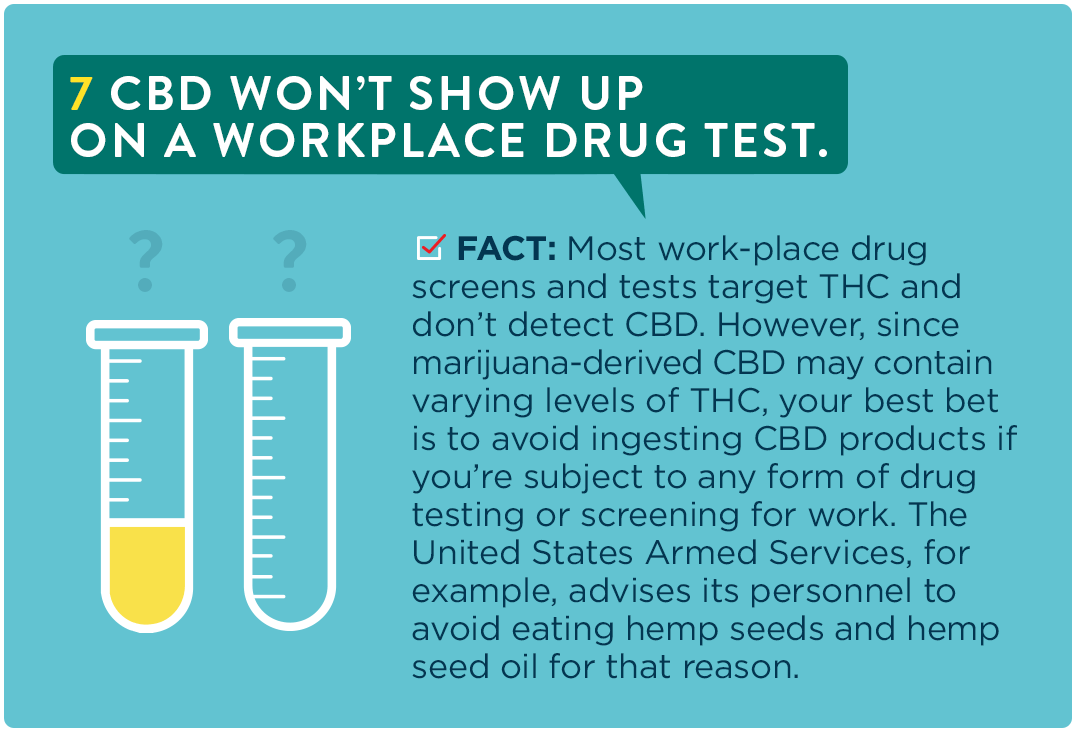 7. CBD won’t show up on a workplace drug test

Fact: Most workplace drug screens and tests target THC and not CBD. However, since marijuana-derived CBD may contain varying levels of THC, your best bet is to avoid ingesting CBD products if you’re subject to any form of drug testing or screening for work. The United States Armed Services, for example, advises its personnel to avoid eating hemp seeds and hemp seed oil for that reason.

8. There are only two cannabinoids in the cannabis plant: CBD and THC

Fact: There are more than 120 cannabinoids in the cannabis plant, but THC and CBD are the most abundant. 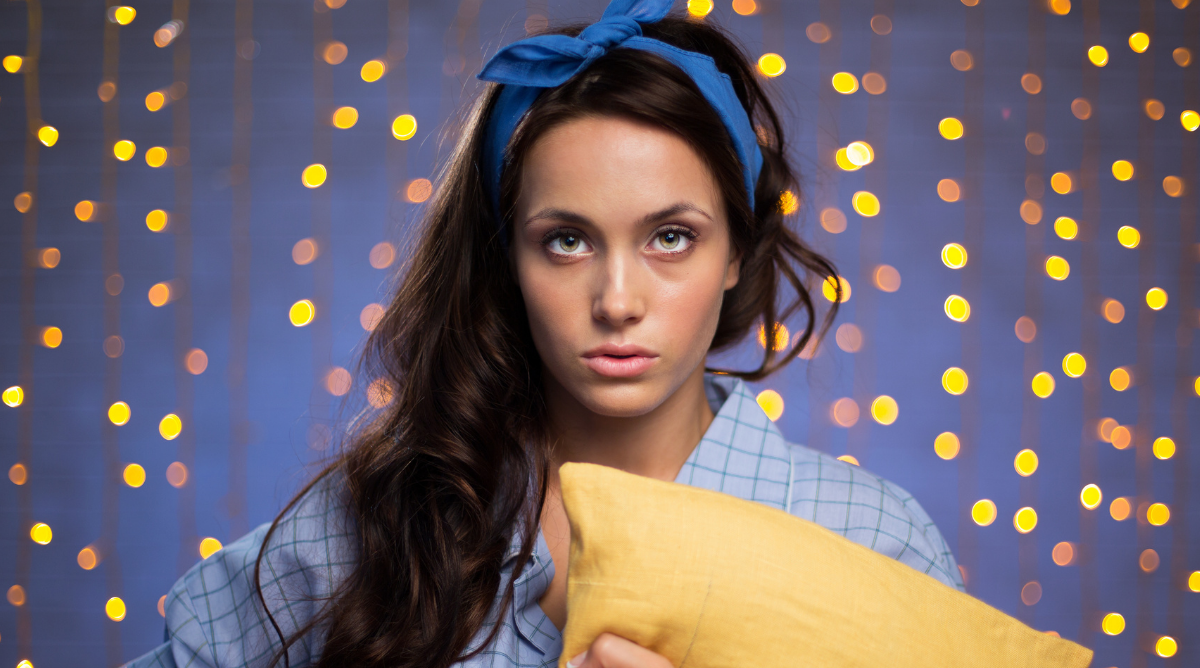 Self Care Sunday: Do You Have Coronasomnia?

Best Strains of Cannabis for Migraines