Posted by Marijuana Doctors on 05/21/2019 in Medical Marijuana

Research has shown that marijuana can provide relief from a wide variety of medical conditions. But there’s still plenty to be learned about this plant and its effects on humans. While most research has focused on the therapeutic effects of cannabis, one of the big questions yet to be fully answered is how marijuana affects men versus women.

One reason is that most research is conducted on men only. While limiting the subjects of studies to one sex is a way of minimizing variation between participating individuals, it has resulted in a shortage of information about how marijuana affects women’s bodies and brains compared to men’s.

While the current research is mostly preclinical, several studies have looked at how cannabis affects the sexes differently. Here is an overview of the results.

Why Does Cannabis Affect Men and Women Differently?

Most people understand that height and weight may play a significant role in your initial tolerance to a drug—larger people may need more of a drug to experience the same effects as smaller individuals. It’s a bit more difficult to understand why marijuana should affect men and women differently, especially if they’re similar in size. In fact, there are several key differences between male and female anatomy and physiology that have a significant effect on how individuals react to marijuana. These include:

The chemicals in cannabis work by binding to unique receptors in the brain. The number, density and function of these receptors change from person to person, eliciting different effects for each cannabis user. One thing that affects the prevalence of these receptors is the presence and quantity of certain sex hormones. Because the amount of each type of sex hormone differs between men and women, they have different amounts of receptors, affecting the way they react to marijuana.

Sex hormones don’t just affect the number of brain receptors—certain hormones have a direct effect on the chemicals in cannabis. Estrogen is the most notable of these hormones because it regulates the production of fatty acid amide hydrolase (FAAH), a chemical that degrades the endocannabinoid anandamide, which is the human body’s natural version of THC. When estrogen levels are decreased, FAAH is less regulated and can freely degrade anandamide, resulting in greater anxiety and depression and a reduced response to THC.

While this is an area that is still being researched, preclinical studies have suggested that men and women metabolize marijuana chemicals differently. It is thought that this has to do mostly with sex hormones, but research is inconclusive.

While there may be other factors that we are still unaware of, current research has focused on these three differences between men and women. The majority of research, however, has focused on sex hormones and their interactions with cannabis chemicals. We’ll explain this in more detail as we examine the biological and behavioral differences between men and women.

Cannabis and the Male Body

Most of the available preclinical studies on marijuana focus on the male body because of the research practices mentioned above, but it’s also true that three-quarters of all marijuana users are men. Men don’t just consume more cannabis than women, however: They’re also two to three times more likely to develop dependencies on drugs, including marijuana. In fact, men who use marijuana are less likely to be cannabis-only users than women. While the reasons for these behavioral differences are likely a complex mix of socioeconomic and cultural factors, there is a chance that there may be a biological component. Research has shown that male marijuana users tend to have higher rates of delta9-tetrahydrocannabinol in their bloodstream, though what this means on a biological level is still unclear.

Research indicates that men tend to have more stable reactions to marijuana as well. This may be due to the fact that men have fewer monthly fluctuations in sex hormones than women do. It’s also important to note that men’s use of marijuana has an effect on hormone production. THC essentially blocks the production of gonadotropins in the pituitary gland, which are essential for producing testosterone. THC also depresses the production of certain hormones that affect prostate function and sperm production.

Benefits of Marijuana for Men

Here’s a general overview of what researchers have learned about the  benefits and drawbacks of marijuana for men.

Of course, these benefits come in addition to the already established benefits of marijuana, like its ability to help people fight cancer, alleviate anxiety disorders and regulate seizures.

Effects of Marijuana on Men 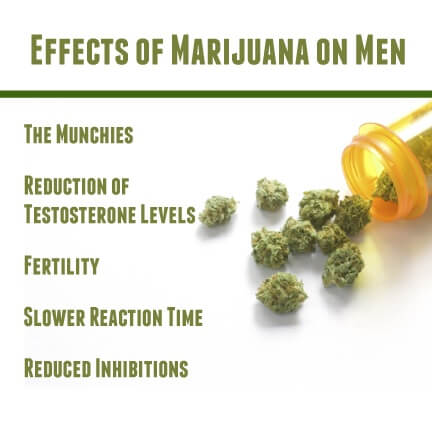 While marijuana offers numerous benefits for men, there are specific side effects that either affect men specifically or tend to affect men more than women. These include:

Cannabis and the Female Body

While most of the available research on marijuana focuses on men, some studies have analyzed the effects of marijuana on the female body. Of particular interest to many is how women’s hormonal cycles affect their reaction to marijuana. Because estrogen regulates the breakdown of endocannabinoids, and because women’s estrogen levels fluctuate throughout the month, women’s reactions to ingesting marijuana vary widely based on their menstrual cycle. When estrogen levels are at their peak during ovulation, for example, women tend to become more sensitive to THC. During menstruation, when estrogen levels are at their lowest, women’s bodies break down endocannabinoids more freely and don’t react as strongly to THC.

There are also interesting behavioral differences between men and women when it comes to marijuana ingestion. Women tend to smoke less than men and tend to start smoking later in life. When asked why they smoked, women reported that they were using it as a way to help cope with social and psychological stressors. They also tend to increase their rate of marijuana ingestion more quickly than men and to have more difficulty quitting, relapsing more often. Part of the reason for this may be the fact that women tend to build a tolerance to THC more quickly than men, especially when taking the drug daily. In fact, in one study by Washington State University, female rats were given 30 percent less THC than their male counterparts yet still developed a tolerance more quickly.

Benefits of Marijuana for Women

All of the biological outcomes explained above have resulted in unique effects in women. While not everyone experiences marijuana the same way, many women can experience the following benefits on top of the normal benefits of marijuana use:

Again, it’s important to note that everyone experiences marijuana in a different way depending on their genetic predispositions, body type and health conditions.

Effects of Marijuana on Women

While the above effects tend to be more common among women, other side effects are less frequently observed or more widely disputed. Most notable are the cognitive effects of marijuana on women. While research doesn’t point to a specific conclusion as to how marijuana affects women’s brains, some studies have shown that chronic use negatively affected women’s memory and emotional processing centers.

Experts suggest that women use caution when ingesting marijuana, as their reaction to THC may vary. Typically, doctors recommend that women tailor the type of strain they use to the point in their menstrual cycle, using strains with higher levels of THC during ovulation when they are particularly sensitive.

Regardless of gender, marijuana is a treatment option for a variety of disorders and diseases. Here is a partial list of potential therapeutic uses of marijuana.

No matter how you decide to use marijuana or what you use it for, it’s important to recognize how your gender plays a role in your reaction to cannabis. Women may need to take more tolerance breaks to achieve consistent treatment results and may need assistance handling withdrawal symptoms. Men should keep their reproductive and sexual health in mind when using marijuana and be monitor their behavior as a dramatic change could be a sign of a mental break.

Find a Doctor at MarijuanaDoctors.com