Chances are, if you’re suffering from inflammatory bowel disease (IBD), you’re all too familiar with pain, inability to savor your favorite foods and constant trips to the bathroom. You may even find yourself in and out of the doctor’s office with new medications.

Is there anything else you can try to get relief from your IBD symptoms? According to a handful of studies and research, marijuana for inflammatory bowel disease is your new alternative.

What Is Inflammatory Bowel Disease?

There are two main types of IBD. These are Crohn’s disease and ulcerative colitis.

1)    Crohn’s disease involves any area of your gastrointestinal tract, from your mouth to your anus.

2)    Ulcerative colitis is limited to your large intestine or colon. It affects your colon or the last section of your small intestine, or sometimes both.

When you hear the term “inflammatory bowel disease,” you may think it’s as simple as inflammation in your bowel. But the history of IBD tells a different story of a complicated set of conditions with no known cause. IBD, as mentioned, is often the term used for describing the two separate disorders: ulcerative colitis (UC) and Crohn’s disease (CD).

These two conditions most likely appeared as isolated cases a few centuries ago, but their clinical presentation of definable entities didn’t attract medical interest until the latter half of the 19th century. Doctors may have come across these conditions over a period of a few centuries but weren’t able at that point to appreciate their uniqueness.

UC is a mucous membrane inflammation of the colon and is often characterized by abdominal pain, bloody diarrhea and cramping rectal pain. Ulcerative colitis was the first subordinate type of IBD identified as a distinct entity. Therefore, the early history of inflammatory bowel disease is the chronicle of ulcerative colitis. This doesn’t mean that UC appeared before CD, as patients were probably suffering from both conditions long before modern medicine could distinguish them.

Physicians made reports of chronic diarrhea that dated as far back as Greek antiquity. Many causes of diarrhea were discussed even by Hippocrates (~460–370 BCE). The prevalence of gut inflammation was featured in medical schools in the early 19th century, and both John Brown (1810-1882) and François-Joseph-Victor Broussais (1772-1838 CE) generated theories that all diseases came from GI tract inflammation.

In 1859, a case report stated that Sir Samuel Wilks (1824-1911) was the first doctor who came up with the term “ulcerative colitis” to describe a condition similar to what we today call “UC.”

It was in the year 1932 that a Crohn, et al, publication recognized CD as a separate entity from UC. Also, according to some, the initial 1859 case report written by Wilks mentioned above could have been about CD instead of UC. Still other reports before 1932 described CD often by the name “regional enteritis.”

Giovanni Battista Morgagni (1682-1771) is said to be the first person to provide a complete description of Crohn’s disease. They called him the “father of anatomic pathology.”

Typically, the instance of IBD depends on what part of your intestinal tract is involved. The IBD symptoms you experience mimic many other conditions. They include:

Although symptoms can vary widely among patients, most people who suffer from IBD experience some degree of persistent or chronic abdominal pain, diarrhea, constipation, or constipation alternating with diarrhea.

Inflammatory bowel disease can lead to severe intestinal complications, including:

Inflammatory bowel disease, particularly UC, also increases your risk of getting colon cancer. It can affect your other organs as well. For example, if you have IBD, you could also get inflammation of the eye, skin conditions, kidney and liver disorders, arthritis (most common) or bone loss. These are all complications residing outside your intestines. Eye, skin and joint complications often occur simultaneously.

The prevalence of IBD is widespread. In fact, the estimated number of American adults who have been diagnosed with IBD has immensely risen since 1999 from two to three million, according to the Centers for Disease Control and Prevention (CDC). And these numbers don’t even count younger adults under 18 years of age who could also have the condition. 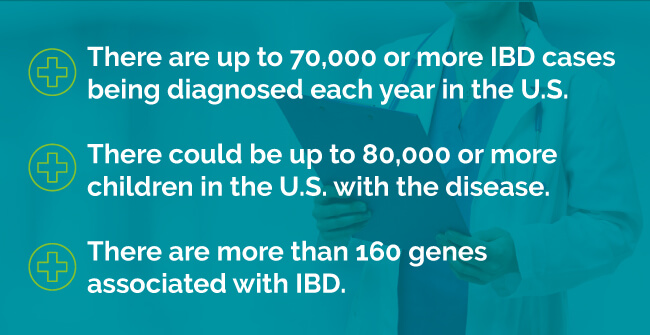 Other startling statistics include:

Current Treatments Available for Inflammatory Bowel Disease and Their Side Effects

The goal of IBD treatment is to reduce the inflammation that is triggering your symptoms. The best-case scenario is that the treatments relieve not only your symptoms, but also put you into long-term remission and reduce your risk of complications. There’s no cure for inflammatory bowel disease. Typically, treatment for IBD involves either medication or surgery.

Physicians often take a stepwise approach for treating IBD. They start you off with the least harmful medications that you only take for a brief period. Then, if these don’t provide you with relief, they turn to other drugs.

These are often the first type of drugs doctors use for treating IBD. Treatment usually begins with aminosalicylates which are anti-inflammatory, aspirin-like medications, such as:

You can take mesalamine orally or administer it as a rectal enema or suppository to treat UC. Since they are anti-inflammatory, they not only relieve your flare-up symptoms, but they also help maintain remission.

Common side effects of anti-inflammatories include:

If this class of medication doesn’t provide you enough relief, your doctor will probably turn to a corticosteroid. This medication is a fast-acting anti-inflammatory. They also reduce your inflammation significantly. Two common types of corticosteroids are hydrocortisone and prednisone.

Common side effects of corticosteroids include:

Because of these side effects, your doctor won’t prescribe corticosteroids for long-term use. They’re only used for treating flare-ups.

These are the next step drugs your doctor will likely prescribe if corticosteroids aren’t working or if you need medication for a prolonged period. These aren’t used for flare-ups since it can take several months for them to work. Examples of the most standard immunosuppressives are:

Immune modifying agents are the next drugs used if corticosteroids fail or if you require them for prolonged periods. These medications aren’t used in acute flare-ups, because they may take as long as two to three months to take action. Common side-effects of many immunosuppressives include:

These drugs don’t treat inflammation directly. Instead, they target your immune system, which releases chemicals that reduce inflammation in your intestine walls.

If you have UC and are running a fever, you doctor may prescribe antibiotics. They’re meant to control or prevent infection. They can decrease the amount of damage and sometimes heal abscesses and fistulas in cases of CD. Common side effects of antibiotics include:

Other medications your doctor may suggest to control inflammation and relieve your IBD symptoms include pain relievers, anti-diarrheal medication, Vitamin D, calcium supplements and iron supplements.

If lifestyle and diet changes, medication therapy or other treatments don’t help relieve your symptoms, your doctor may recommend surgery.

Medical cannabis for Inflammatory Bowel Disease has shown some therapeutic promise over the past decade for a broad range of conditions. Fortunately, if you have IBD, medical marijuana seems to live up to expectations.

A 2011 study found that 48 percent of Crohn’s disease patients and 51 percent of ulcerative colitis patients use weed. Thirty-three percent of these people used cannabis for inflammatory bowel disease.

Although there have only been a few high-quality studies that researchers have conducted for marijuana and inflammatory bowel disease and its impact on patients, there is compelling evidence on its safety and effectiveness as an IBD treatment.

To further understand why medical pot is beneficial for patients with inflammatory bowel disease, it’s useful for you to have knowledge of your endocannabinoid system (ECS). This system helps your body regulate:

The use of medical marijuana is directly associated with a reduction in Crohn’s disease activity and the lessening of symptoms related to other gastrointestinal conditions. IBD patients have been found to have higher levels of cannabinoid receptors in their colonic tissues. Due to this, patients who suffer from this condition and choose to use this alternative treatment method are usually presented with the reducing of symptoms and alleviating any inflammation in the body. Intestinal inflammation is directly affected and lessens in a timely manner.

When you ingest THC and CBD, they fit into these same receptors, since they’re similar to endocannabinoids. They trigger reactions that lead to either very low or high levels of specific molecules that your cells of your brain use to communicate to each other (neurotransmitters).

An uncontrolled survey study showed that patients who used medical pot for several months reported weight gain and BMI. This is ideal for IBD patients since their symptoms of diarrhea and vomiting can lead to weight loss and malnutrition. They also reported improved social functioning, general health perception, physical pain, depression, the ability to work and a decrease in disease activity.

In a study conducted in 2013 where patients were either given medical cannabis or a placebo, patients diagnosed with Crohn’s Disease (a form of IBD) were reported to go into complete remission, saw an improvement in appetite, and an improvement in their sleep patterns without any significant side effects.

What Symptoms of Inflammatory Bowel Disease Can Marijuana Treat?

In a 1990 case report, there was a link between Cannabis and Inflammatory Bowel Disease and remission of the disease.

As the therapeutic role of weed gains more media attention, more IBD patients are using it to control their symptoms. They’ve reported being able to manage successfully:

Not only do certain strains of cannabis ease these symptoms, but it can also enhance your mood, which makes it beneficial if you struggle with depression.

Best Strains of Marijuana to Use for Inflammatory Bowel Disease

Although researchers have already established medical marijuana as a valuable treatment option for patients with inflammatory bowel syndrome, they have since found certain strains that are more effective for treating different symptoms of the disease.

For instance, you’ll want to use an Indica strain if you’re trying to relieve pain and inflammation, have general anxiety or are struggling with insomnia, since it’s a relaxing strain and makes you sleepy. You can also try a hybrid strain if you’re finding Indica strains too sedating. Hybrid strains consist of both Indica and sativa. Some good strains to use for your IBD symptoms include:

When you have inflammatory bowel disease, your life means always wondering when your disease will flare up and how intense your symptoms will be this time. But now, you have a handful of different strains that can help ease most of your IBD symptoms in various ways.

If you’re interested in trying medical marijuana to ease your IBD symptoms, continue taking your current medication, but consult with your doctor about the benefits (and risks) of medical marijuana for inflammatory bowel disease for your unique situation.

If you are looking for relief from inflammatory bowel disease, we can help. We can connect you with hundreds of quality marijuana doctors across the nation in all legal marijuana states. Book your appointment with a local, qualified physician through MarijuanaDoctors.com today and let us help improve your quality of life!

For more information about how cannabis can be used to treat Inflammatory Bowel Disease, check out our resources: