People with inflammatory bowel disease (IBD) often do not get enough relief from current treatments, leading many to turn to alternative therapies including medical marijuana. An estimated 15 to 20 percent of IBD patients in the U.S. and Canada currently use marijuana (known medically as cannabis) and up to 40 percent have tried it at some point for symptom relief.

IBD primarily includes Crohn’s disease and ulcerative colitis—inflammatory conditions that cause a number of gastrointestinal (GI) symptoms and can lead to serious complications, surgery, and chronic disability. Crohn’s can affect any part of the GI tract, while colitis affects only the colon. Both diseases can cause diarrhea and constipation, rectal bleeding, abdominal cramps and pain, an urgent need to move the bowels, as well as general symptoms like fever, weight loss, and fatigue.

While there is no definitive evidence that cannabis can control the chronic inflammation that leads to the symptoms of IBD, studies have shown that using cannabis may improve symptoms including nausea, abdominal pain, diarrhea, and appetite.

Marijuana contains cannabinoids, chemicals that activate cannabinoid receptors that occur throughout the body. For IBD, the promising effects of cannabis are on the immune system (i.e, inflammation), the GI tract, and the pain system.

Like most medical marijuana research, studies on its effect on IBD are limited and not well funded. But a number of studies show promise. Animal studies have found clear anti-inflammatory effects on colitis, as have laboratory studies on human cells. Several clinical studies on patients have also found improved symptoms. In one survey of nearly 300 patients, those who reported using cannabis said they experienced significant improvement in abdominal pain, poor appetite, nausea, and diarrhea.

Jury still out on inflammation

The first randomized, controlled trial of cannabis in Crohn’s disease, published in Clinical Gastroenterology & Hepatology, found that smoking cannabis twice daily for eight weeks was associated with significant improvement in symptoms compared to placebo. Remission of Crohn’s symptoms occurred in 45 percent of those using cannabis, and 25 percent were able to stop taking corticosteroids. However, cannabis use was not associated with an improvement in objective disease markers, such as CRP levels (a marker for inflammation).

Another study found that IBD patients using cannabis experienced less pain, and improved social functioning, ability to work, and other IBD symptoms. Yet most studies do not show any long-term reduction in inflammation. Summing up the evidence, the Crohn’s and Colitis Foundation stated: “cannabis use may offer symptomatic benefit and improved quality of life when patients have poor or incomplete response to standard therapy. However, none of the available data demonstrate improvement in biochemical or disease activity scores.”

There is some concern about side effects of using medical marijuana. One study found that long-term use was associated with increased risk of surgery in patients with Crohn’s, though other factors were not well controlled for and may have been responsible for the increase. However, one possible explanation is that patients using cannabis may stop their medications. One study found that the majority of patients taking cannabis stopped conventional drugs, and medication noncompliance is associated with relapse and could lead to progression of the disease.

Other long-term effects associated with cannabis use in the general population, according to a New England Journal of Medicine study, include risk of addiction to other substances, diminished life achievement, increase in car accidents, chronic bronchitis, abnormal brain development in a younger population, psychiatric disturbances, depression, and anxiety.

Currently, 33 states plus the District of Columbia have legalized medical cannabis, and 10 of those states and the District of Columbia have legalized recreational cannabis for adults 21 years of age and older. Twenty-three states list IBD, Crohn’s disease, and/or ulcerative colitis as qualifying conditions, while the rest list symptoms of IBD that can be treated by cannabis, such as chronic pain or nausea.

So depending on where you live, cannabis might be an option if you need additional relief for your symptoms. Talk to your doctor about the pros and cons.

If you’re looking for a CBD-heavy strain of cannabis, here are our top recommendations. These strains have been shown to have effective results while minimizing or eliminating all psychoactive side effects: 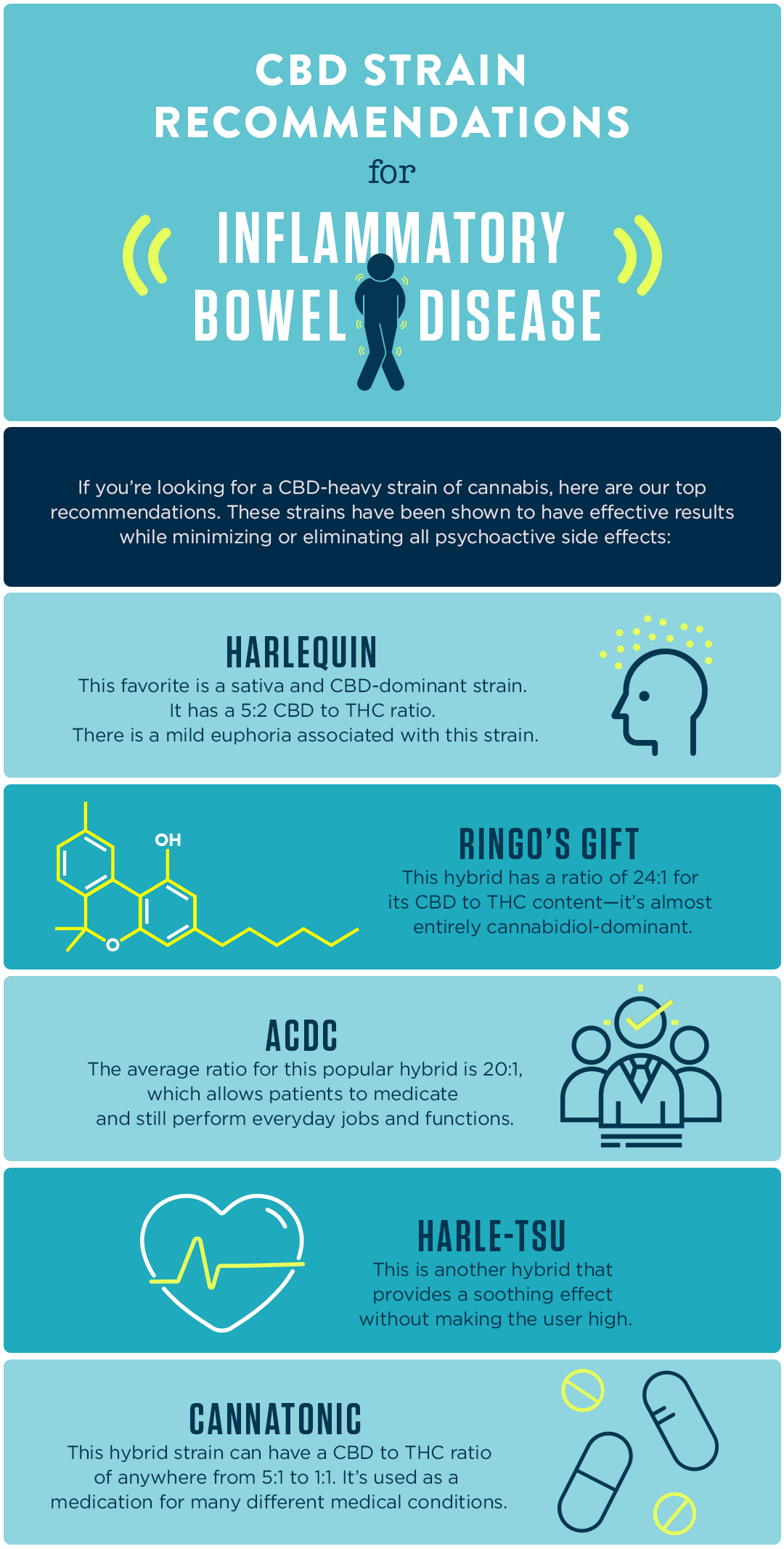 Laurie Tarkan is an experienced health journalist who writes for the New York Times, national magazines including Self, Health, and Glamour, as well as websites such as iVillage, EverydayHealth, and Prevention.