Epidermolysis bullosa (EB) describes a group of genetically inherited diseases revolving around connective tissue failure. This leads to painful blisters in the skin and mucosal membranes. A relatively rare disease, EB ranges from mild to lethal, and the symptoms can be debilitating. Even the lightest pressure — a hug from a parent or the slight rubbing from a garment tag — can cause the skin to tear.

Numerous studies have proven cannabis is an effective treatment for EB. Learn more about marijuana and epidermolysis bullosa and find out how this medicine can treat EB’s many symptoms.

What Is Epidermolysis Bullosa?

EB affects the skin. Covering 22 square feet and weighing up to eight pounds, skin is our largest and most under-appreciated organ — it protects us from the elements and fends off infection, to name just a few of its functions. Humans have two layers of skin — the dermis, or lower layer, and the epidermis, or upper layer. Between the epidermis and the dermis, proteins act as anchors to keep the layers from shearing, or moving independently of each other.

For those with EB, the protein anchors aren’t present between the layers of skin. This means any friction of the skin is dangerous. Even light pressure is enough to cause the layers to painfully rub against each other and create excruciating blisters. Children born with EB earn the name “butterfly children” because of the extreme fragility of their skin. Blisters and sores form easily, especially around the joints.

EB also affects the inner mucous membranes, most commonly the lining of the mouth, esophagus, stomach and intestines. This means that the struggle of individuals with EB is more than skin-deep — because sores develop in these vulnerable membranes, eating often becomes a painful struggle. For many patients, it is almost impossible to eat solids because of the friction.

First discovered in the late 19th century, EB is a result of a genetic mutation in one of 18 possible genes. An inherited disorder, EB will pass down in families through unaffected carriers — people can carry recessive genes for EB and not show any signs of the disease. Individuals with EB will typically present symptoms in infancy or early childhood, but for some people, blisters don’t begin appearing until adolescence or early adulthood.

EB is a rare disease. In the United States, a type of EB occurs once in every 20,000 births, affecting roughly 200 children annually.

Most types of EB begin at birth or soon after, and it can be tough to identify the exact form of epidermolysis bullosa that an individual has.

Epidermolysis bullosa has four major types, categorized based on the location of blisters within the layers of skin. Within each category are many subtypes — researchers have identified over 30 distinct EB subtypes that vary in severity. Some individuals with EB only experience mild blistering on hands and feet, and live normal, productive lives. For others, the blisters inhibit movement, and the complications are often lethal. One symptom remains across all types of EB, delicate skin that tears and blisters with the slightest trauma or friction. 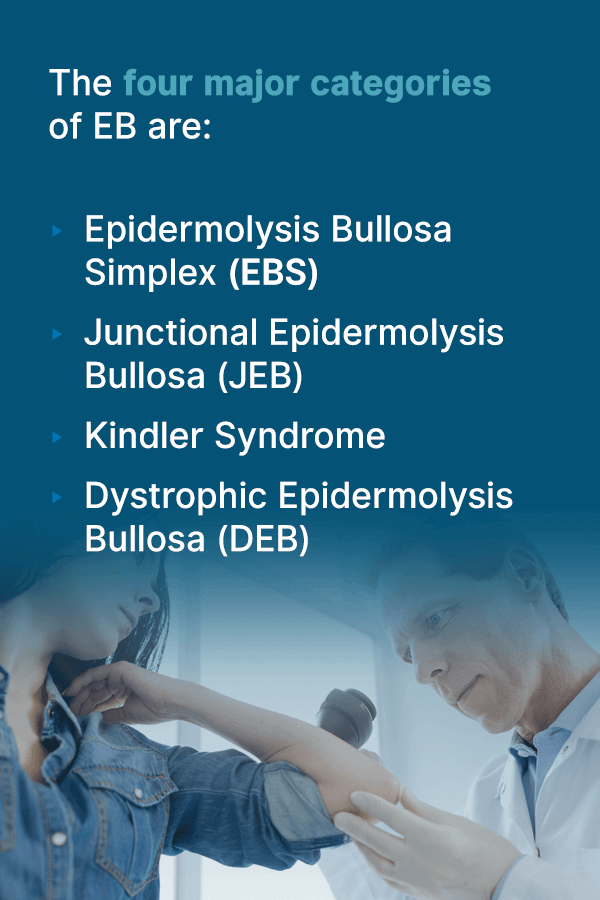 The four major categories of EB are:

One type of EB is non-genetic and is a result of a confused immune system, epidermolysis bullosa acquisita.

EBS is the most common type of EB, accounting for up to 70 percent of cases worldwide. For individuals with EBS, blistering occurs in the top layer of skin, the epidermis. EBS is often milder than other forms of EB, but the blistering remains painful and is made worse by any kind of rubbing. There are two subtypes within EBS, localized and generalized. With localized EBS, blisters mainly form in the hands and feet, while in generalized EBS they may occur in every part of the body.

The second-most-common form of the disease, DEB accounts for 25 percent of EB cases. In DEB, blisters form in both the lamina lucida and the dermis layers of skin, and the healed wounds often scar. This tough scar tissue causes further problems, most often by tightening and contracting the joints and fusing together the toes and fingers. The membranes in the mouth may also contract and narrow, making it difficult and painful to speak.

JEB is characterized by blistering in the lamina lucida layer of skin. The lamina lucida is within the basement membrane zone of the skin, where the dermis and epidermis meet. JEB is the most severe form of EB and accounts for up to 5 percent of cases. For a child to develop JEB, both parents must be recessive carriers of EB. JEB has three subtypes:

With all subtypes of JEB, the pain and complications are serious and may even be fatal.

In Kindler syndrome, blisters may form across multiple skin levels in the basement membrane zones or lower. For individuals with Kindler syndrome, the skin often blisters on their hands and the tops of their feet. Skin color changes in patchy formations, and the sensitive mucous lining of the mouth, eyes, urinary system and intestines is often damaged. Kindler syndrome can lead to a host of complications, including gum disease, which often results in early tooth decay and loss.

Another rare type of EB is Epidermolysis Bullosa Acquisita. EBA is recognized as an autoimmune disorder and can vary from minor blistering of the skin to life-threatening forms that put other internal organs at risk. EBA isn’t contracted genetically and is caused by a malfunction of the immune system. In individuals with EBA, their immune system produces antibodies that attack the collagen proteins that connect the epidermis and dermis layers of skin. Typically, EBA develops later in life, during adulthood.

EB presents with a variety of symptoms depending on the specific subtype. However, the most common symptoms include the following:

Many more symptoms can present themselves to those suffering from EB, but the most widespread sign is skin easily breaking and blistering. Other symptoms and side effects primarily stem from an individual’s fragile skin.

Side Effects of Epidermolysis Bullosa

The symptoms of EB often lead to more serious complications. Some of the most common side effects include infection, digestion issues, the fusion of the fingers and toes and even skin cancer. Others are:

Other complications that can develop from EB include eye problems, esophageal stricture, and muscle atrophy.

Medical Treatments for Epidermolysis Bullosa and Their Side Effects

EB has no known cure, so treatment revolves around healing blisters and preventing new ones from forming. Typically, this requires intensive home care and careful lifestyle changes. Individuals with EB need daily wound care and protective bandaging, and in many cases, stomach feeding tubes are necessary to ensure proper nutrition and growth.

Prescribed medications for epidermolysis bullosa focus on relieving pain and itching relief as well as managing infection. Opioids like oxycodone and hydrocodone are sometimes prescribed to manage acute pain. However, opioids are known to carry a host of harmful side effects, including:

In severe cases, surgery may be recommended. Possible surgeries include widening the esophagus, grafting skin and restoring lost mobility.

How Marijuana Is an Effective Treatment for Epidermolysis Bullosa

Medical marijuana can provide immense relief for patients who suffer from EB. Due to the rarity of EB, little direct research has been conducted on the effects of medical cannabis for epidermolysis bullosa. However, we know how pot helps relieve many of its symptoms.

Marijuana contains a variety of cannabinoids, which are the chemicals responsible for both the health benefits and the “high” associated with cannabis. Marijuana has at least 85 different types of cannabinoids, all with slightly different effects and impacts.

Cannabinoids work by interacting with the body’s endocannabinoid system, which helps regulate metabolism, memory, appetite and immune response, to name just a few of its functions. There are two different types of endocannabinoid receptors in our bodies — CB1 receptors, located in the brain and central nervous system, and CB2 receptors, which are found in the immune system.

Although EB does not yet have a cure, medical marijuana can help make life more livable for those who suffer from it.

What Symptoms of Epidermolysis Bullosa Marijuana Can Treat

Medical cannabis can directly address some of the most debilitating side effects of EB.

Individuals with EB live with constant pain from their blisters and open wounds. Complications such as fusion of fingers and toes can further add to their misery. Marijuana provides a far safer alternative to powerful painkillers like opioids, and numerous studies have shown that medical cannabis radically reduces pain and discomfort. Experience a relief with an all-natural pain reliever without risking the adverse side effects associated with other powerful drugs.

Another almost-universal side effect of EB is pruritus, or an overwhelming need to itch. Several studies have proven cannabis to be a natural antipruritic, which could provide relief to patients suffering from EB. In 2002, researchers in the UK showed that cannabinoids reduced histamine-induced pruritus for patients with dermatitis, and in 2012, a team of scientists in Japan discovered new endocannabinoid receptors S-777469 and S-444823 that, when activated, significantly reduced the impulse to scratch.

Another study conducted in 2005 demonstrated that the body’s endocannabinoid receptors play a vital role in the management of itching, further proving marijuana’s effectiveness in reducing pruritus.

Although all of the details of EB are still unknown, it’s thought that an inflammatory immune response is partly responsible for blistering in many cases. The use of cannabis may attenuate allergic responses within the body and is capable of blocking key CB2 receptions in the skin that lead to a decrease in your body’s inflammatory response of the epidermis.

Both THC and CBD possess anti-inflammatory properties, and in a 2013 study, German researchers found that topically applied cannabis decreased inflammation in mice with dermatitis. Scientists at Stanford University and West Virginia University showed that CBD oil is an effective topical treatment for EB, especially for inflammatory responses.

A common complication of EB is the infection of blisters. For individuals with EB, their wounds are vulnerable to pathogens all around them in the environment. Not only do infected wounds bring intense pain and delay healing, but they may become necrotic — the skin may rot and become dead. In EB, the most common bacteria are

Marijuana has a known antibacterial effect and has been used to combat infection for centuries. In relation to EB, cannabis has been demonstrated to effectively destroy many species of streptococcus and staphylococcus bacteria, as well as candida and pseudomonas infections.

Best Strains of Medical Marijuana to Use for Epidermolysis Bullosa

To treat EB, look for medical cannabis rich in the cannabinoid CBD, which has anti-pain and anti-inflammatory properties and won’t give you the marijuana “high.” Below are some suggested strains to help with some of the most debilitating symptoms of EB.

To treat the crippling pain and inflammation associated with EB, consider one of these cannabis strains:

Best Methods of Marijuana Treatment to Use

You can use medical marijuana through a wide variety of methods, from vaping and smoking to edibles. However, for patients with epidermolysis bullosa, the most effective way to apply medical marijuana is often through topicals.

Topical cannabis applications include patches, lotions, creams and oils. Especially well-suited for localized healing, topicals are absorbed by the skin and provide quick relief. Topical marijuana doesn’t produce a “high” and provides all the benefits of cannabis without the mental euphoria.

For patients with EB, topical applications of marijuana can give quick relief to the areas that need it most — around their blisters. Topicals bring the anti-inflammatory, antibacterial and anti-pain benefits of cannabis to the places on a patient’s body that need them the most.

EB is a painful and debilitating disease. Let medical marijuana give you or a loved one the relief they need — browse our directory of medical marijuana doctors to find a certified professional near you, or search for a medical cannabis dispensary to learn about delivery information, reviews, hours and more. By combining cannabis and epidermolysis bullosa treatments, you can get the relief you seek.