If you’re new to the world of cannabis, even setting foot inside a dispensary can seem like an overwhelming thought. You’ll see boards listing all manner of strange names you’ve likely never seen or heard of before.

Much like wine is available in red, white and blends of both, marijuana comes in three basic types: Indica, Sativa and hybrids. Each differently named variety is called a strain and falls under one of these three categories. Again, like wine, weed comes in an array of types, each with its unique high, chemical makeup and flavor profile.

These strains have names like ACDC, Confidential Cheese, Champagne Kush, Cannalope Haze and Barry White, to name a few. And yet, all the varieties — from Northern Lights to Strawberry Cough and Jack Herer — originate from just two species of plants: Cannabis Indica and Cannabis Sativa.

You could take a guess as to what the effects of the various marijuana strains could be, judging by the names alone. For instance, strains with the word “haze” in the names are typically predominantly Sativa, while strains with “kush” are mostly Indica.

However, you’re better off finding out the difference between the two primary species of marijuana, Indica and Sativa, to narrow down your preferred strain for your needs.

The effects of marijuana can vary widely depending on which subspecies, or strain, you use to treat yourself. As each major strain of cannabis has its own effects on your mind and body as well as different medicinal benefits, it’s crucial to know what you’re buying and using in advance. That way, you can find the strain that’s right for you and your specific needs.

Here, we’ll take a look at Indica vs. Sativa, what each species is, their very different properties and how to choose the right species to suit your medical needs.

Before discussing in detail what Indica and Sativa strains are and the similarities and differences between the two, you should understand what cannabinoids are. Specifically, THC and CBD. If you’ve used weed before or are researching marijuana, it’s likely you’ve already heard of cannabinoids.

There are more than 85 cannabinoids found within the cannabis plant. Arguably, the best-known is THC (tetrahydrocannabinol). It’s the primary psychoactive compound of the plant.

CBD (cannabidiol) is probably slightly less familiar than THC. CBD is more frequently researched, since it’s non-psychoactive. It’s also the substance responsible for many of the medicinal and therapeutic properties associated with medical pot.

When you’re taking medical marijuana, the effects it provides you is the most crucial element. And, it’s the chemical makeup of each species of marijuana that you need to focus on to achieve the feeling you’re seeking. Sativa strains usually contain higher levels of THC to CBD. Indica strains usually have more CBD to THC.

There can be variance between strains that make this general rule less than 100% reliable. For example, you can sometimes find Indica strains that contain more THC than some Sativas. There are also Sativa strains with much higher CBD levels than Indica strains. This is why it’s helpful to focus on the general effects of each species rather than solely on their chemical properties.

THC and CBD are a unique class of compounds called cannabinoids. The medical community is excited about CBD, as it’s known to have many therapeutic benefits.

There are at least four notable differences between the THC and CBD that relate to their effects on:

Cannabinoid receptors, known as CB1 and CB2, are part of the endocannabinoid system and play several vital roles within our bodies. They’re found in the liver, lymphatic system, kidneys, nerve tissue, and your spleen.

These CB1 and CB2 receptors are crucial to your blood formation and immune system. The endocannabinoid system is also responsible for the enjoyment and pleasure you gain from exercise.

After you smoke, vaporize, or ingest cannabis and cannabinoids flood your body, these CB1 and CB2 receptors are unlocked, providing you with relief from dozens of conditions involving pain, nausea and more.

Similarities and Differences Between Indica and Sativa

The plant species Cannabis Sativa L. has two main sub-species used for medicinal purposes: Cannabis Indica and Cannabis Sativa. While legally, there is no difference between Sativa and Indica, there are many differences between the Sativa-dominant and Indica-dominant cannabis strains. Both terms are used to speak about broad categories that show where a strain lies in the cannabis spectrum.

This work is licensed under a Creative Commons Attribution-NoDerivs 3.0 United States License. If you like our infographic, feel free to share it on your site as long as you include a link back to this post to credit Marijuana Doctors as the original creator of the graphic.

Before going into the details of Indica vs Sativa, the below table provides you with at-a-glance information to understand the main differences between the two strains: 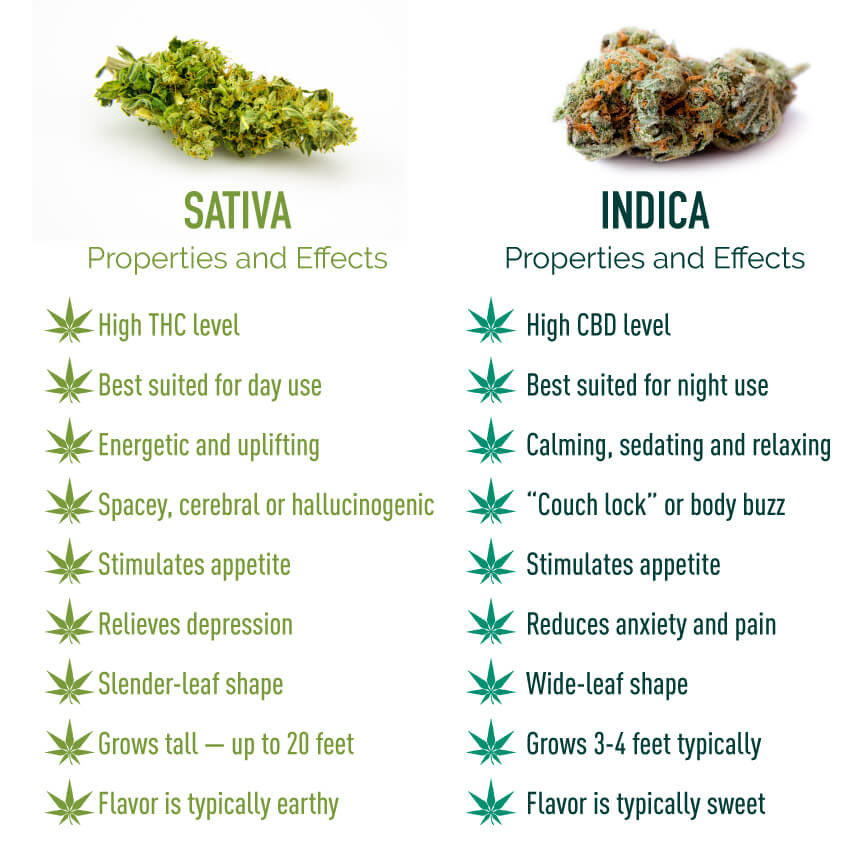 Origin-wise, Indicas come from the Indian subcontinent and central Asia, whereas Sativas come from equatorial regions like Mexico, Jamaica, and Thailand. The two different types are different in appearance.

Indicas have a flowering period of between 45 and 65 days. Sativas need between 60 to 90 days to finish flowering. Sativas require less time for the actual plants to grow, so the overall time required for both plants works out similarly.

Indicas are used to give you a “stoned” effect that is centered on your body. They may also enhance your physical perceptions like taste, sound, and touch. If you need to relax mentally and physically, Indica makes a better fit than Sativa.

Contrastingly, Sativas produce a “high” effect. This makes you feel creative, cerebral, giggly and energetic. Some people may feel psychedelic effects, too. Sativa sensations are less overpowering than those of Indica.

Taste-wise, Indicas are usually sweet and sometimes fruity, while Sativas are earthy.

A strain of cannabis known for having sedative full-body effects, Indica is the preferred choice when you want to relax or to sleep better at night. Medically speaking, if you’re in a lot of pain, suffer from anxiety or have muscle spasms, Cannabis Indica enables you to be more restful so you can recuperate.

Appearance wise, Indica is bushy and short and is, therefore, more suitable for growing indoors. It’s found in geographical areas of between 30 and 50 degrees’ latitude and has buds that are heavy, dense and tightly packed. Indicas contain naturally high levels of CBD and are therefore extremely potent. Popular Indica strains include:

What Symptoms Does Indica Treat Best?

Medical pot patients usually take Indica before bedtime so they can have uninterrupted sleep. Indica is also used for treating nausea, lupus, multiple sclerosis, and fibromyalgia.

Side Effects of Indica

As Indica marijuana strains have rather heavy sedating effects, they can make you feel more stoned than high. You may feel you’re sedated when taking it and should never ingest Indica when you need to be alert. Although they offer a significant physical high that’s useful for battling pain, Indica strains can have depressive qualities and may make you feel unmotivated. If you suffer from low mood or depression, speak to a knowledgeable budtender before buying.

When you take Indica, it’s similar to ingesting a sleeping pill. It also gives you a strong desire to eat. Fragrance-wise, Indicas have a heavy and distinct odor. Their buds are narrower, longer and less tightly packed than those of the Sativa strain.

Sativa marijuana strains tend to be more invigorating than Indicas. People sometimes use these when they want to be more creative, socialize and be physically active. If you’re using marijuana medically, Cannabis Sativa is a suitable choice for daytime use if you suffer from depression, mood disorders, ADD or fatigue.

Sativa is thin and tall in appearance and is well-suited to growing outdoors. It’s found in geographical areas of between 0 and 30 degrees latitude. Some Sativa strains have a similar effect on you as drinking strong coffee. Usually, Sativas have a lighter aroma than Indicas. Popular Sativa strains include:

What Does Sativa Treat Best?

As Sativa gives you a far more energetic, uplifting and cerebral high than Indica, it’s best to use it during the day. When you take this strain, it makes you feel energetic and creative. For this reason, it’s often used by different kinds of artists. The benefits of Sativa include:

Sativa is often used to treat behavioral and mental issues such as ADHD and depression. Like Indica, it stimulates hunger, which makes it very useful if you have been diagnosed with certain forms of cancer, anorexia or HIV/AIDS.

Although Sativas are useful when you need an energy boost, they can make you feel “high.” Also, some users may experience panic attacks, paranoia, and anxiety when taking a Sativa strain. These should be avoided if you have social anxiety.

What Is a Hybrid?

When discussing Indica and Sativa, we’d be remiss if we didn’t explain hybrids.

As you might expect, hybrids are somewhere in the middle of the Indica-Sativa spectrum. Their exact effects are dependent on the traits they inherit from their parent strains. Hybrid strains are often bred to fuse what growers believe to be the best aspects of both plants.

Hybrids and crossbreeds of Indica and Sativa strains produce varieties that carry some characteristics of each parent. For example, adding Sativa to Indica strains adds mental clarity and decreases sedative effects. And adding Indica to Sativa strains can reduce or even eliminate the Sativa tendency to stimulate anxiety. Common strains include OG Kush, Himalayan Gold, Blue Cross, 00 Diesel, and Kandy Kush.

Hybrids are often referred to based on the dominant subspecies inherited from their lineage — for example, pure Indica, mostly Indica, mostly Sativa or pure Sativa. Instead of using pure Indica or pure Sativa, many patients can benefit from the use of hybrid strains. There is a vast number of strains available for patients, each with a different cannabinoid profile and effect.

These classifications have been in use since the differences in resin production and structure were first discovered in the early 18th century. The hybrid category was adopted later, as cannabis growers began mixing plants from varying places all over the world.

Which Strain Is Right for Me?

A lot of the fun involved with using cannabis is finding out what you like personally. Don’t be afraid to ask your marijuana doctor or budtender questions or to experiment with new varieties. There is a strain available to suit everyone, whether you’re using the plant for medical or recreational purposes. In a sense, this can be very much a process of trial and error.

Perhaps rather than focusing on the different effects of each species, you could try strains with various ratios of CBD to THC. Remember: if you’re using the plant medicinally, CBD is a known therapeutic.

Considerations on Dosage, Strains, and Forms

It’s a good idea to experiment with different systems of delivery. The way you take pot can provide different effects. If you’re wondering if you should inhale or ingest pot, consider the following:

Speak to a Marijuana Doctor or Search for a Dispensary

Medical research into Indicas and Sativas is still in its infancy. What we know right now is just the tip of the iceberg. With cannabis being legalized in many states and countries all over the world, we’re seeing the beginning of a new and exciting journey for everyone involved.

If you’re in doubt about which strain might suit your needs, search for a marijuana doctor or an experienced budtender at a dispensary using our directory. They’ll be able to answer your questions and can point you in the right direction for products that can help you. The most important points to keep in mind are the significant differences between each strain and how you feel they could be useful in helping your find relief from your condition.