How to Store Medical Marijuana at Home, at Work and While Traveling

Home / Blog / How to Store Medical Marijuana at Home, at Work and While Traveling

How to Store Medical Marijuana at Home, at Work and While Traveling

Storing medical marijuana properly can help ensure that it works as well as it should and is safely kept away from kids and pets. Here’s how to take the best care of your medical marijuana whether you’re at home or on the go. 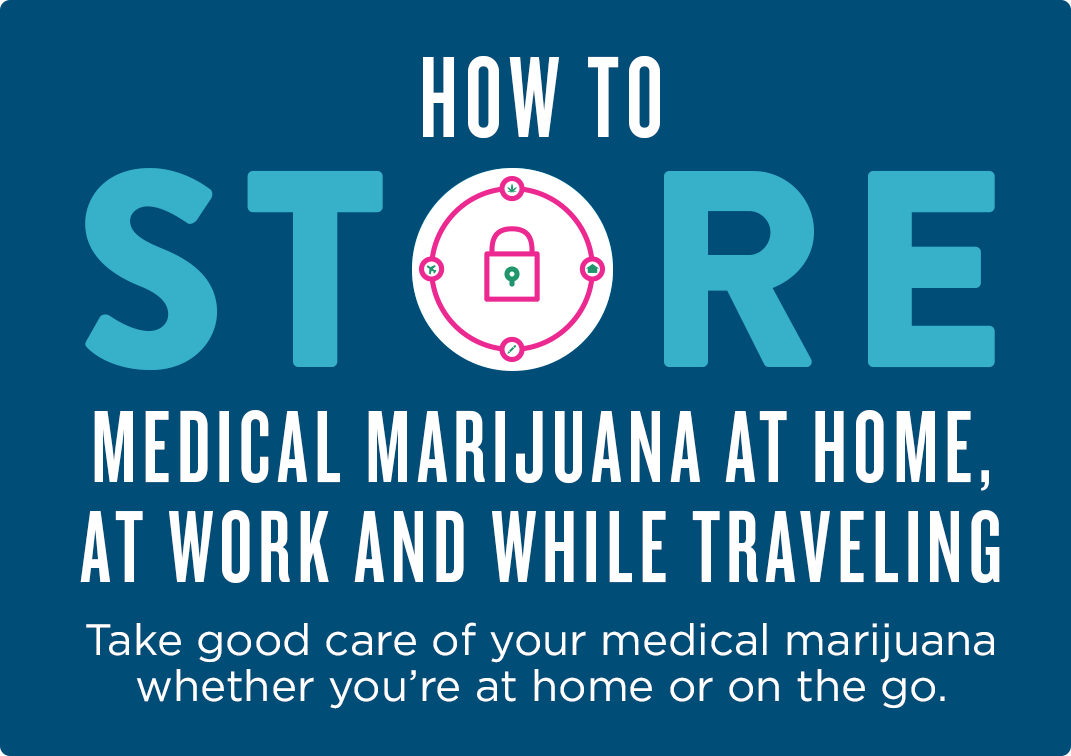 Keep all marijuana in child-resistant packaging in a locked cabinet or lockbox. It should be clearly labeled in a medicinal jar and with other prescription medication. If you have children or grandchildren around, it’s especially important to lock up medical marijuana properly because it can be mistaken from regular food or candy.

Increasing numbers of children have visited the emergency department or been admitted to the hospital after accidentally ingesting marijuana. For older kids and teens who may be tempted to experiment, you may also want to keep the lockbox with your medical marijuana stash out of sight.

If you cook with medical marijuana, clearly label anything that’s not immediately consumed as medicinal and keep it far away from everyone else’s food, especially your children’s.

If your child has been prescribed Epidiolex, which is the first and only FDA-approved prescription CBD for Lennox-Gastaut syndrome or Dravet syndrome, two rare forms of epilepsy, the manufacturer’s storage instructions are specific: Store the medication upright at 68 to 77 degrees F. When traveling, you have leeway: the medication can be kept at 59 to 86 degrees F. Don’t freeze it and keep the cap tightly closed.

In Connecticut, for example, the law prohibits ingesting marijuana in the workplace. Employers also can prohibit the use of intoxicating substances during work hours. Check your employer’s policy on medical marijuana storage options (if any).

It’s illegal to smoke marijuana when operating a motor vehicle, but if you’re a registered medical marijuana patient, you can travel with it in your car. If you’re driving home from a medical marijuana dispensary or need to bring it with you somewhere, you’re legally allowed to do so if you’re staying within the state. 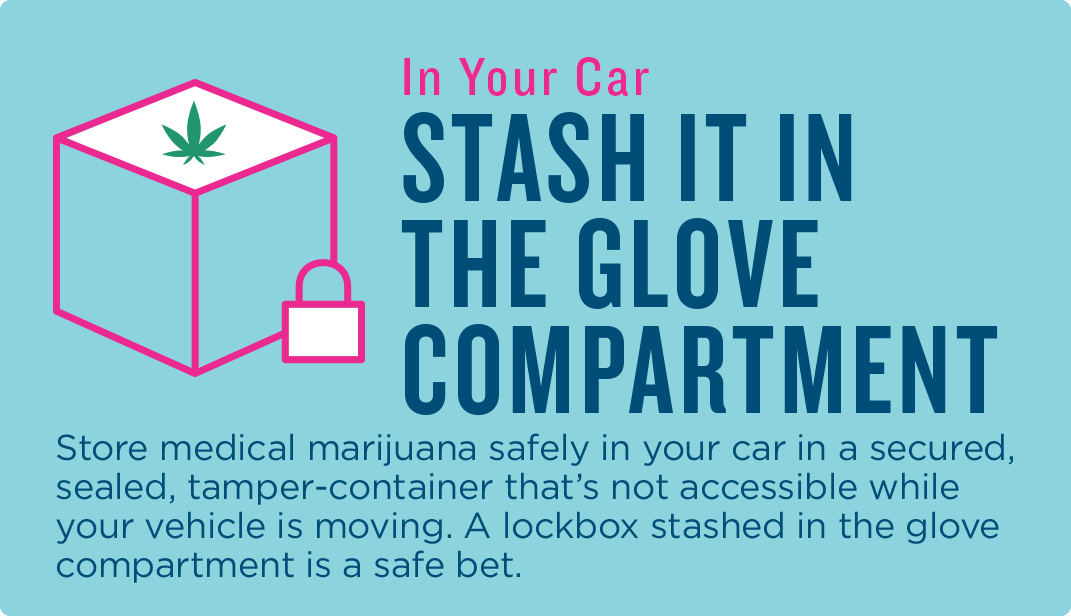 To transport medical marijuana safely and legally in your car, it must be in a reasonably secured, sealed, tamper-evident container and reasonably inaccessible while your vehicle is moving. In other words, don’t toss it in your cupholder and call it a day. A lockbox stashed in the glove compartment is a safe bet.

If you’re driving into a state where medical marijuana possession is still illegal, such as Nebraska, you will be violating the state’s laws and subject to criminal prosecution if you’re stopped by authorities. In that case, it’s best not to bring your medical marijuana along, even if it’s stored in a lockbox in the glove compartment.

Because marijuana is federally illegal, authorities can arrest you under federal drug trafficking laws if medical marijuana crosses state lines, according to the United Patient Group, a medical cannabis organization for physicians and patients.

Storing and transporting medical marijuana is tricky if you’re flying. The Transportation Security Authority (TSA) now allows products and medications that contain hemp-derived CBD or medications that are approved by the FDA as legal (such as Epidiolex) to be transported in carry on and checked bags, as long as the product is produced within the regulations defined by law under the Agriculture Improvement Act 2018. The TSA recommends clearly labeling any medication in pill or solid form. It will undergo a visual or X-ray screening and may be tested for traces of explosives. 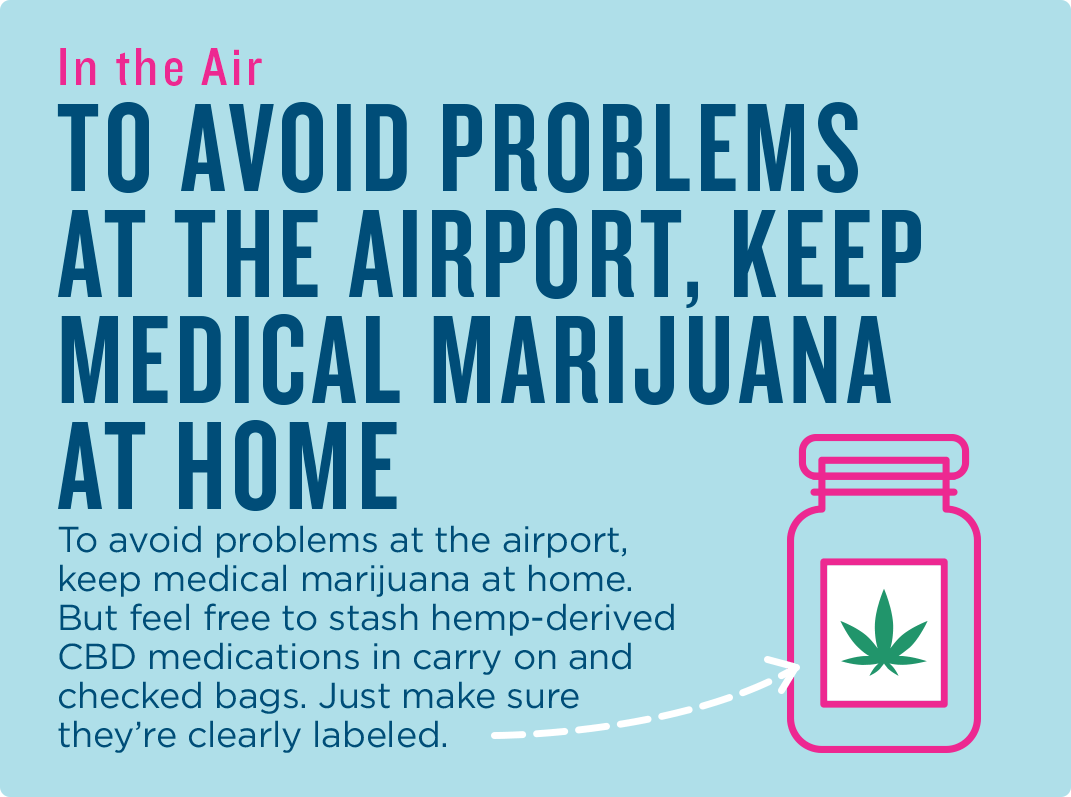 Still, it’s federally illegal to possess marijuana and “certain cannabis infused products, including some CBD oil,” at the airport. The TSA is in the business of screening for potential aviation threats, not drug possession. Still, TSA officers are required to report any suspected violations of federal marijuana law, including possession of marijuana and certain cannabis infused products.

In states where medical marijuana is legal, you may be able to fly with it within the state. Check your state’s medical marijuana regulations before flying. In general, however, flying with medical marijuana domestically or internationally is risky. Even if you’re a registered medical marijuana patient in your home state, federal authorities can arrest you under federal drug trafficking laws at the airport.

A better idea: Register in the state you’re visiting and get the medical marijuana you need there, rather than bringing it with you.