The Munchies According to Science: Cannabis and Your Appetite

Home / Blog / The Munchies According to Science: Cannabis and Your Appetite

The Munchies According to Science: Cannabis and Your Appetite

Posted by Marijuana Doctors on 02/19/2019 in Infographics

There’s only one state of mind that justifies the urge to tear through an entire bag of potato chips, a microwaved plate of freezer-burned taquitos, and even that four-month-old box of chocolate that Grandma sent you over the holidays: being baked. This overwhelming urge to eat salty, sweet or fatty carbohydrate-rich foods after consuming marijuana is a phenomenon colloquially known as “the munchies.”

For individuals suffering from rapid weight loss to cancer patients who experience extreme nausea and loss of appetite during chemotherapy, the munchies can be one of marijuana’s biggest benefits. For recreational users, cannabis can simply make you love the experience of eating, although it can be particularly unkind to the waistline. But what exactly are those cannabis-related cravings all about? And why do they happen?

As it turns out, neuroscientists have been particularly interested in the causes behind the munchies, leading to the exploration of how cannabis affects the brain’s hunger circuitry. This guide will lead you through the science behind this commonly known cannabis phenomenon and studies that support the findings.

How Cannabis Triggers the Munchies

Before diving into the appetite puzzle that is marijuana and your brain, you first have to understand the basics of cannabis and the endocannabinoid system. Cannabis triggers the munchies when the cannabinoid compound tetrahydrocannabinol (THC) binds to and activates cannabinoid type 1 receptors (CB1) to increase appetite.

CB1 receptors are part of the brain and body’s natural endocannabinoid system and are found across various locations. CB1 receptors are primarily located on nerve cells in the brain and spinal cord, but they are also found in some peripheral organs and tissues such as the spleen, white blood cells, endocrine gland and parts of the reproductive, gastrointestinal and urinary tracts.

While CB1 receptors are found in various locations in the body, there are specific regions that are associated with the munchies that come from consuming cannabis.

Solving the THC and Appetite Puzzle

For years, scientists have struggled to understand how marijuana’s primary ingredient, THC, stimulates appetite. Thanks to the recent work of several neuroscience teams, these studies bring us closer to understanding the mystery.

Study 1: Marijuana Changes the Function of Neurons in Your Brain 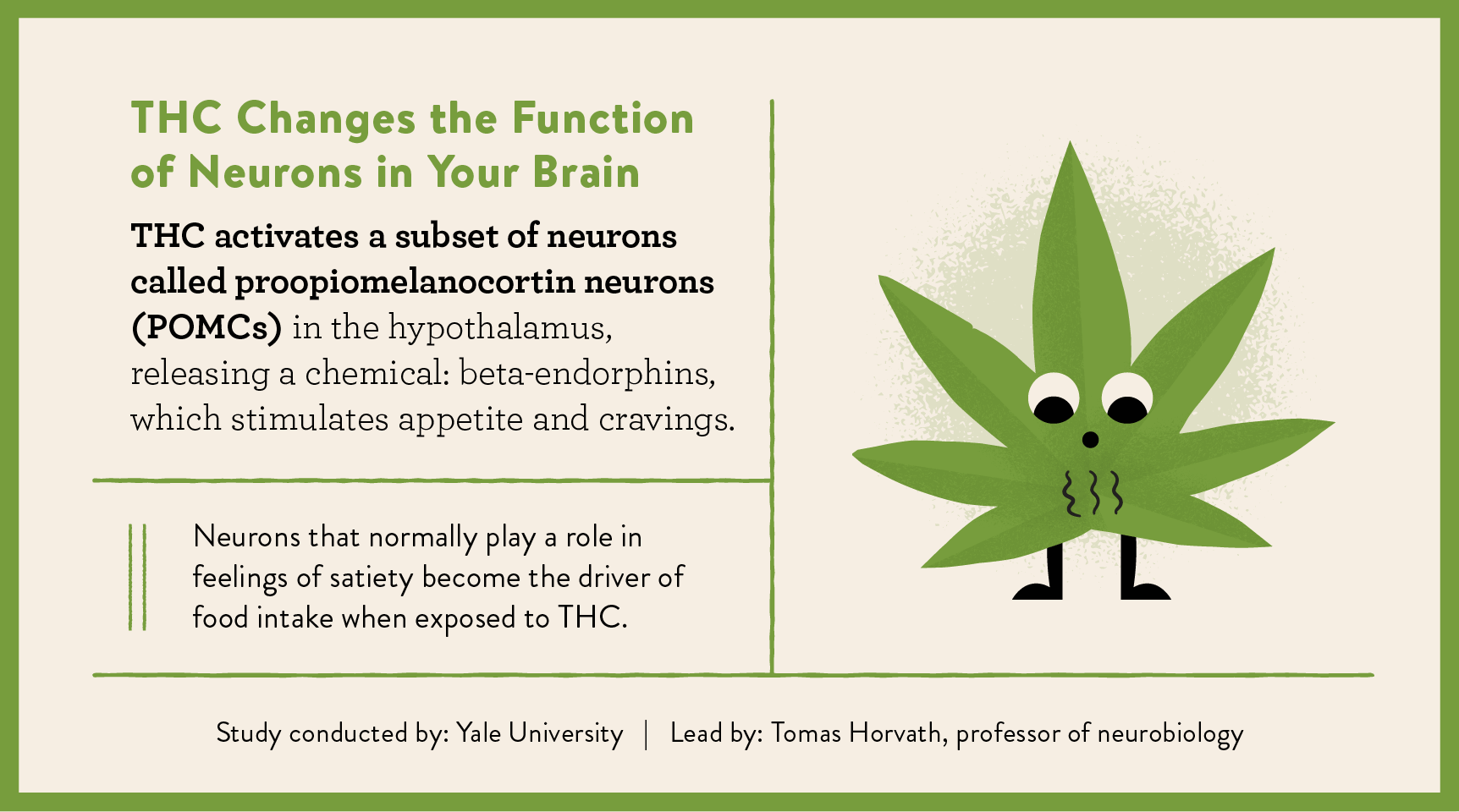 In a 2017 study by Tomas Horvath, a professor of neurobiology at Yale, he and his team of researchers discovered that a set of neurons in the hypothalamus — called proopiomelanocortin neurons (POMCs) — literally become scrambled when exposed to marijuana.

Looking at the pathways that control fullness, Horvath and his team hypothesized that exposure to cannabinoids would simply shut the POMCs off — basically turning out the lights on neurons that tell you you’re full. However, they found that POMCs, which usually secrete a chemical believed to play a role in feelings of satiety, started releasing an entirely different chemical: beta-endorphins. Beta-endorphins stimulate appetite and promote cravings.

Simply put, the neurons that normally trigger satiety become the driver of food intake when exposed to THC. 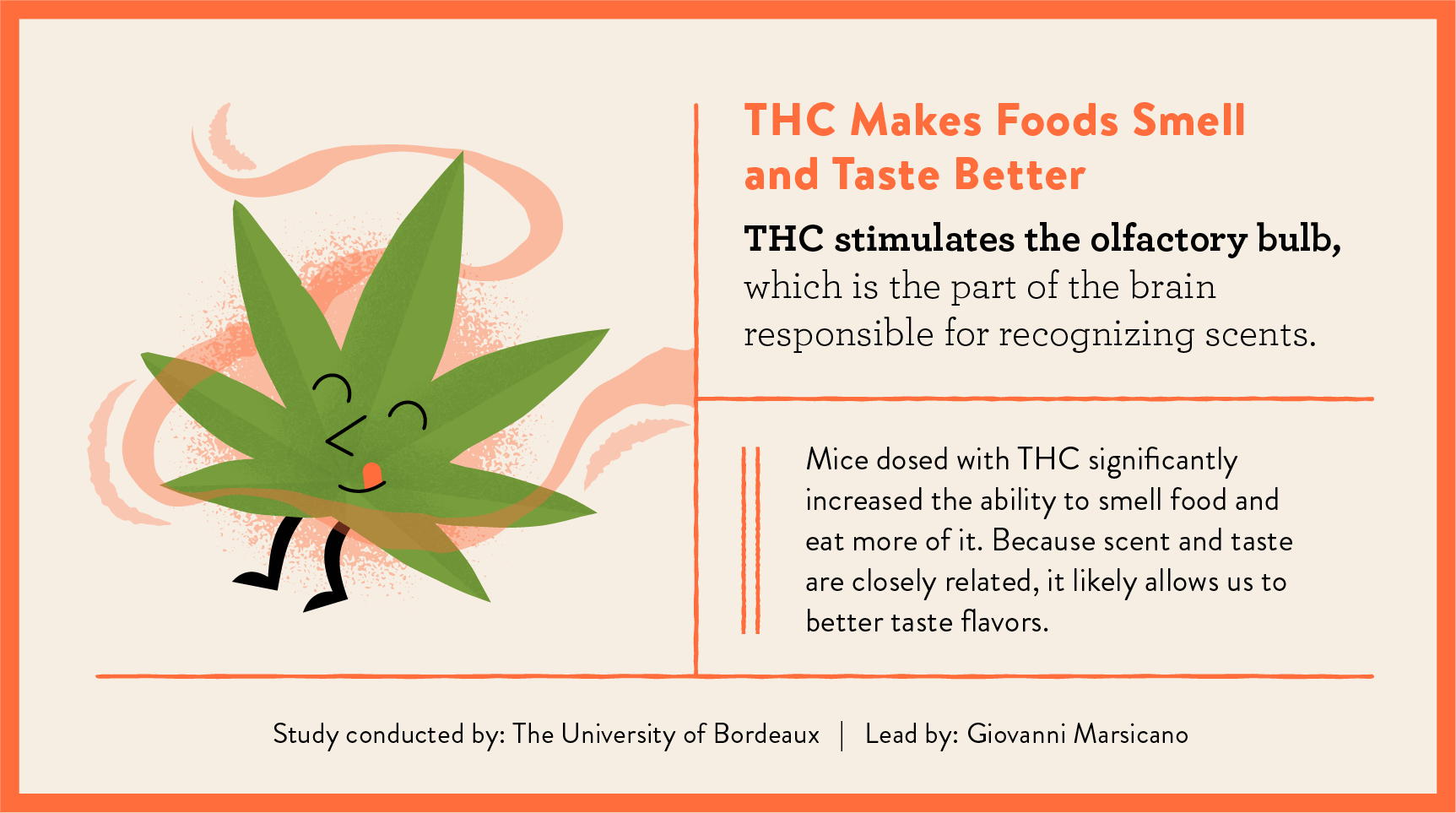 A study conducted by a team of European neuroscientists, led by Giovanni Marsicano of the University of Bordeaux, found that THC stimulates the brain’s olfactory bulb — the part responsible for recognizing scents — essentially making food smell much better than it usually does.

Their research, conducted with mice, found that THC not only fits into the brain’s olfactory bulb, but it also supercharges the smell-detecting ability of mice, enticing them to eat more food because the scent was simply irresistible. This may explain the overwhelming urge to eat food when it’s around you, but what about when food isn’t in sight? The next studies look at the release of hormones in the body that occur from consuming cannabis. 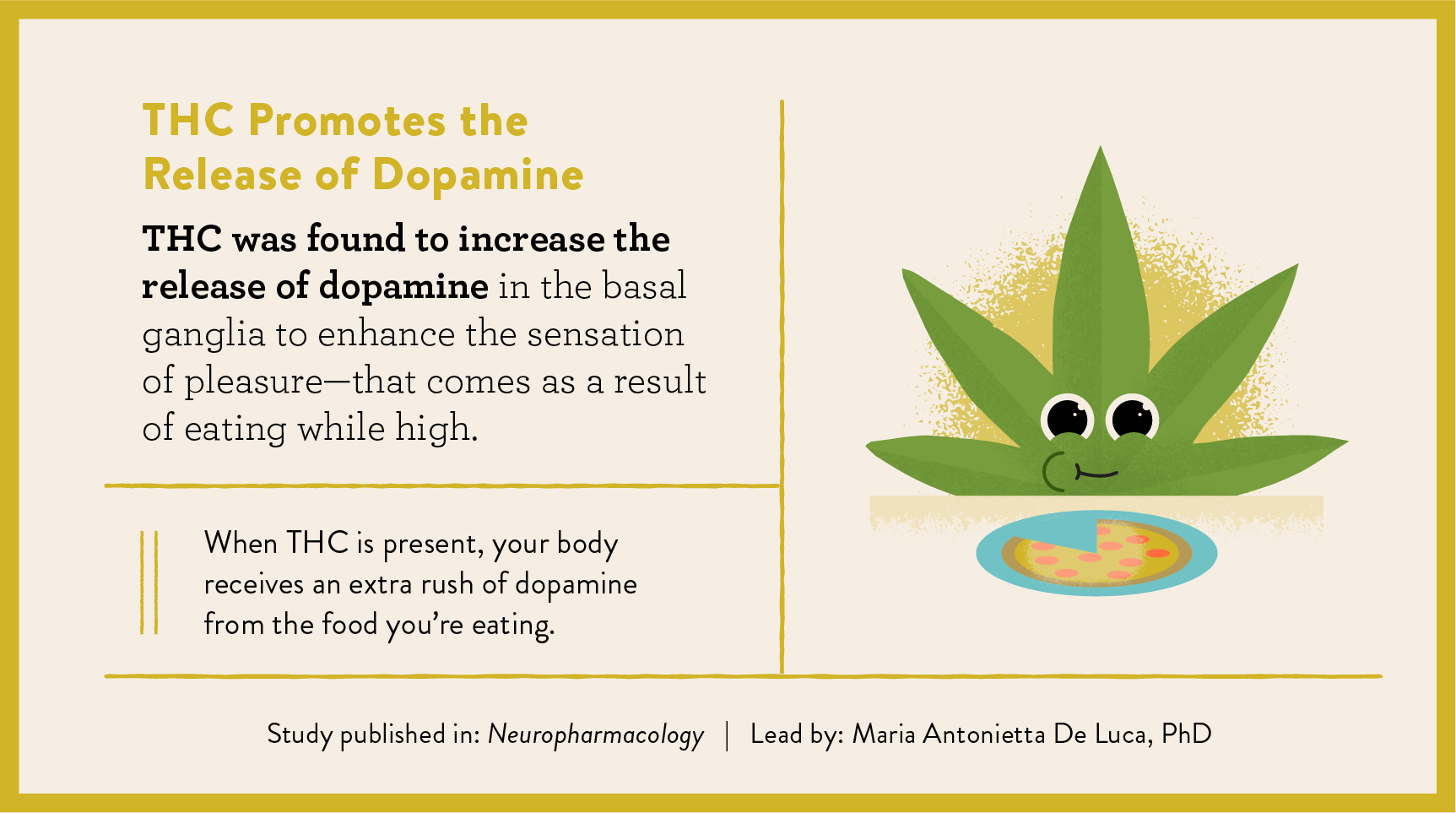 Another study published by Neuropharmacology found that cannabis may cause you to actually love the experience of eating. Maria Antonietta De Luca, PhD, and her team of researchers found that THC also acts on receptors in a region of the brain called the nucleus accumbens, which increases the release of the neurotransmitter dopamine. The release of dopamine enhances the sensation of pleasure that comes from eating while high.

The brain naturally releases dopamine when we eat enjoyable foods, yet when THC is present, your body receives an extra jolt of dopamine from what you’re eating. 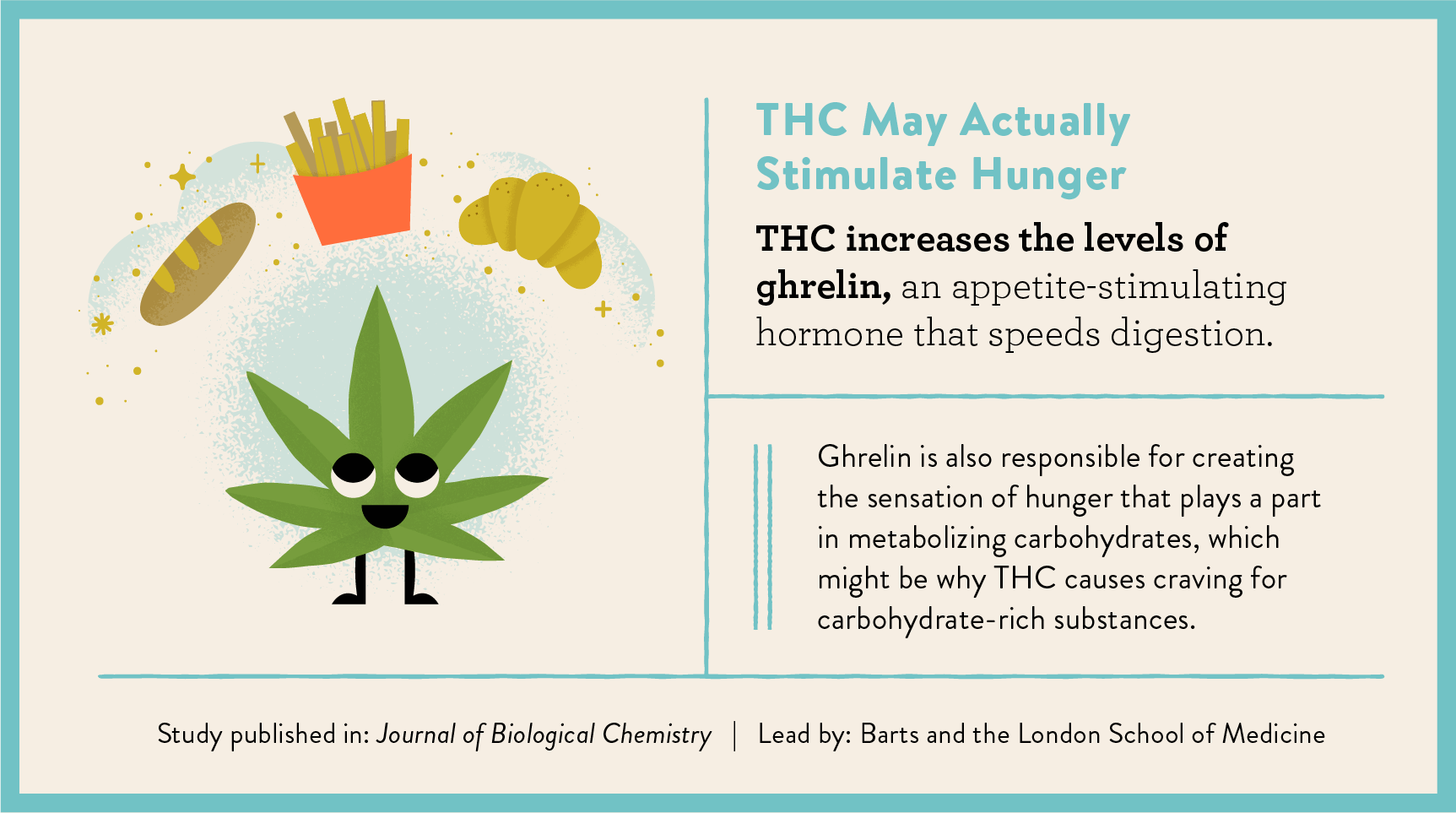 We know that THC makes food more appetizing and pleasurable to eat but what exactly does it do to our gut? In a study lead by Barts and the London School of Medicine, scientists found that THC additionally interacts with CB1 receptors in the hypothalamus, leading to the release of a hormone called ghrelin, an appetite-stimulating hormone that speeds digestion.

Not only does THC stimulate this hormone, but ghrelin is also responsible for creating the sensation of hunger that plays a part in metabolizing carbohydrates, which scientists hypothesize is the reason that THC causes you to feel hungry and crave carbohydrate-rich substances.

This study also found that cannabinoids, when bound to CB1 receptors in the hypothalamus, increased activity levels of the enzyme AMP-activated protein kinase (AMPK). AMPK is largely responsible for metabolic regulation. This means that THC not only causes you to feel hungry by releasing hunger hormones, but it also jump-starts your metabolism by stimulating AMPK.

While the effects of overeating and weight gain as a result of the munchies are typically deemed undesirable, this effect can prove beneficial with certain medical conditions such as cancer, Cachexia and HIV-associated wasting syndrome.

One of the most widely studied therapeutic applications for cannabis and the pharmaceutical drugs derived from cannabis is in the treatment of nausea and vomiting associated with cancer chemotherapy. Cancer patients who suffer from a lack of appetite may also benefit from consuming cannabis during treatment.

Neuropathy is a medical term for nerve damage, which is a common complication of chemotherapy and other cancer treatments. It is typically characterized by a feeling of weakness, numbness, tingling or burning in the hands and feet. Medical marijuana has been shown to provide relief for those experiencing pain from neuropathy.

Cannabis can be effective in stimulating an appetite to help combat the effects of wasting syndrome while relieving the pain that comes from the muscle deterioration of Cachexia. A study published in the Journal of Pain and Symptom Management found 97 percent of HIV patients suffering from wasting syndrome reported an improved appetite with medical cannabis treatment.

Turns out “the munchies” have some benefit after all. While many recreational cannabis consumers find this phenomenon to be rather unkind to the waistline, others can reap the benefits that come with consuming medical cannabis.

We may not need science to tell us that consuming cannabis and getting the munchies tend to go hand in hand — but neuroscience discoveries like the studies we covered are far more important than explaining this phenomenon of ravenous hunger. Findings like these help pave the way for medical marijuana patients who need them most. Learn more about where to find a medical marijuana doctor here.