Cannabinoids and Cancer: The Latest Evidence

Cannabinoids and Cancer: The Latest Evidence

Posted by Marijuana Doctors on 09/01/2019 in Medical Marijuana

Receiving a cancer diagnosis can feel as random as being struck by lightning. But it’s more common than you may think. More than 1.7 million Americans received the news for the first time yearly, according to the National Cancer Institute. As dreaded as the disease is, however, treatment can often be more physically and psychologically challenging than the condition itself. 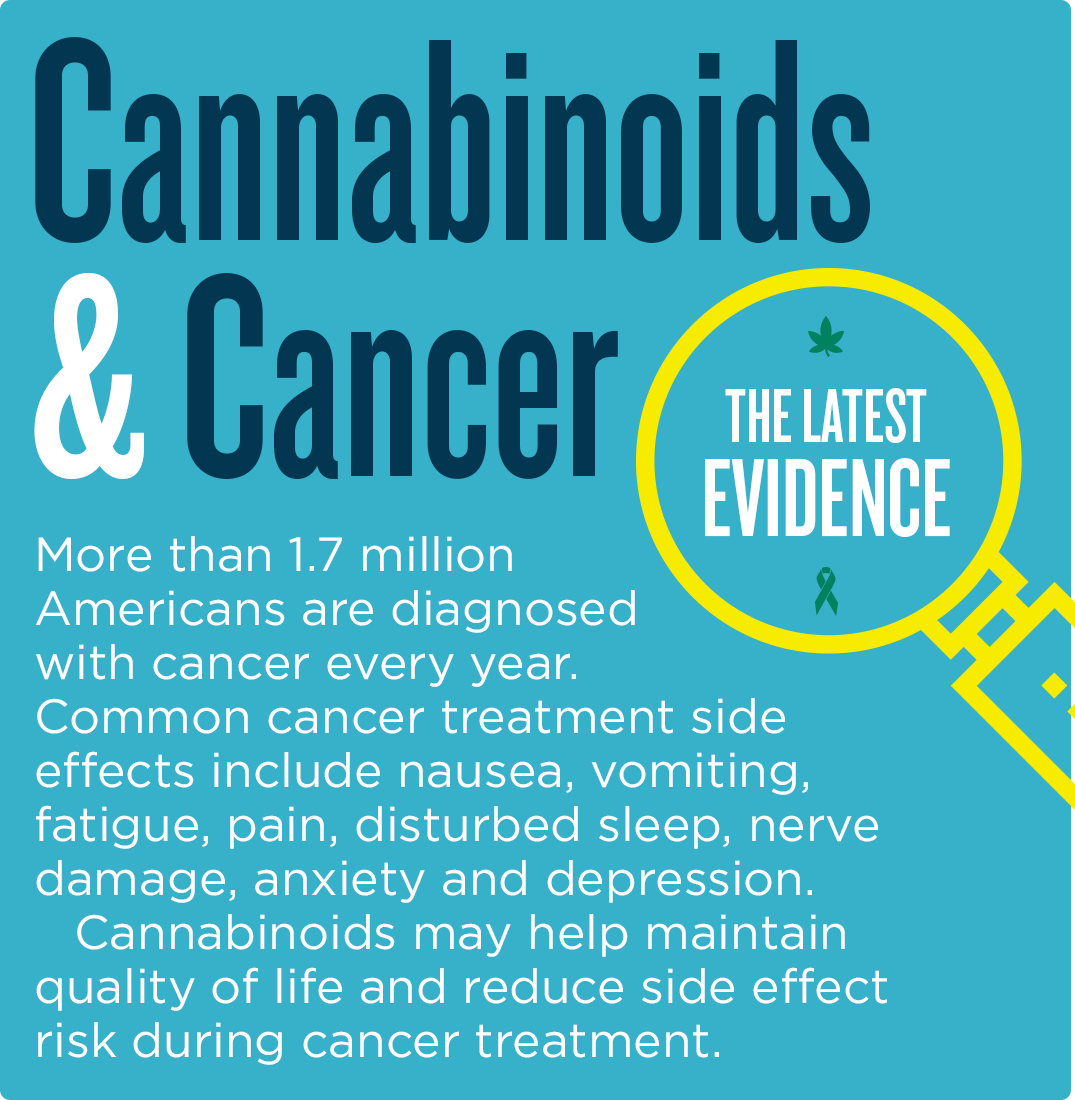 To maintain your quality of life and reduce the risk of these and other complications that may result from surgery, chemotherapy, radiation and cancer therapies, cannabinoids—the chemical components in cannabis or the hemp plant that activate specific receptors throughout the body to affect the central nervous system and the immune system–may help.

Here’s a snapshot of the latest research on cannabinoids——and the role they may play in your cancer treatment plan.

Cannabinoids May Ease Nausea and Vomiting 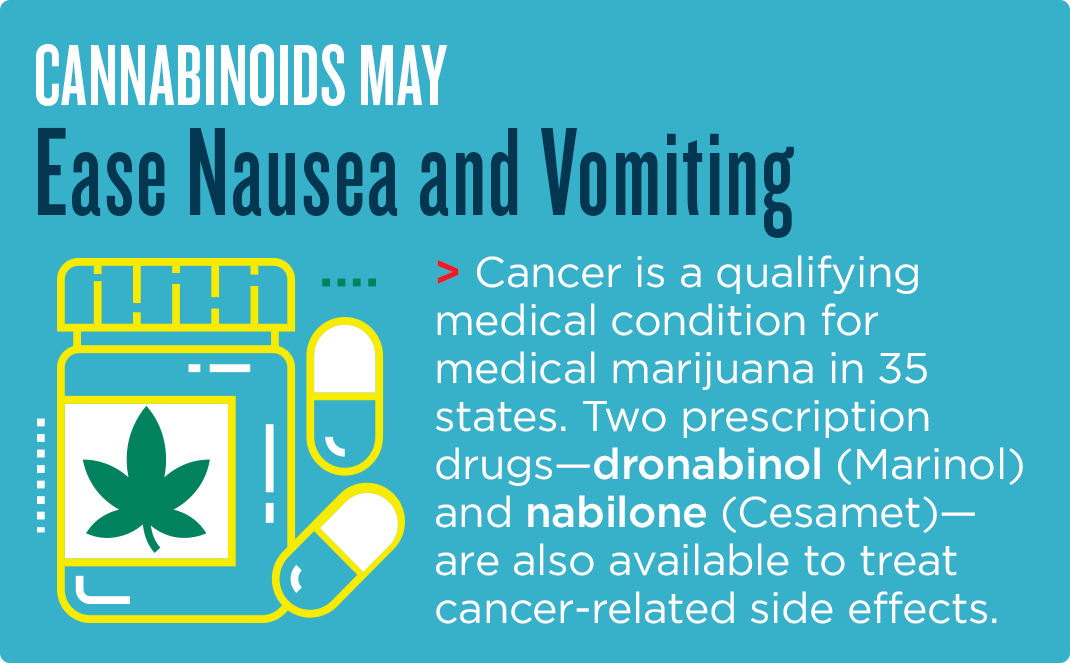 Cannabis remains federally illegal; the U.S. Food and Drug Administration hasn’t approved cannabis itself for treating cancer, or any other medical condition. Yet cancer is a qualifying medical condition for medical marijuana in 35 states. Two prescription drugs—dronabinol (Marinol) and nabilone (Cesamet)—are also available to treat cancer related side effects.

A 2015 Cochrane Review of 23 randomized controlled trials found that prescription cannabinoids (dronabinol and nabilone) were more effective than placebo and were similar to conventional anti-nausea and vomiting drugs at relieved cancer-related nausea and vomiting. However, many receiving the cannabis-based drugs also experienced side effects, such as dizziness and/or feeling high, sleepy and/or uneasy.

Overall, however, study subjects preferred the cannabis‐based medicines to the anti-nausea medicine. When compared with placebo, study subjects who took the cannabinoids were five times more likely to report no vomiting and three times as likely to report no nausea and vomiting. The upshot? Ask your doctor about adding a prescription cannabinoid if you’re conventional anti-nausea/vomiting medicine isn’t helping.

But what about smoking marijuana or CBD oil to relieve cancer-treated related nausea and vomiting? You may want to hold off for now. Several small studies show that smoking marijuana may help reduce nausea and vomiting from cancer chemotherapy and nerve pain. The National Cancer Institute, however, doesn’t recommend inhaling cannabis to treat cancer-related or cancer treatment related symptoms or side effects until more research rolls in. Similarly, according to the American Cancer Society, no studies in people have been done involving marijuana oil or hemp (CBD) oil. 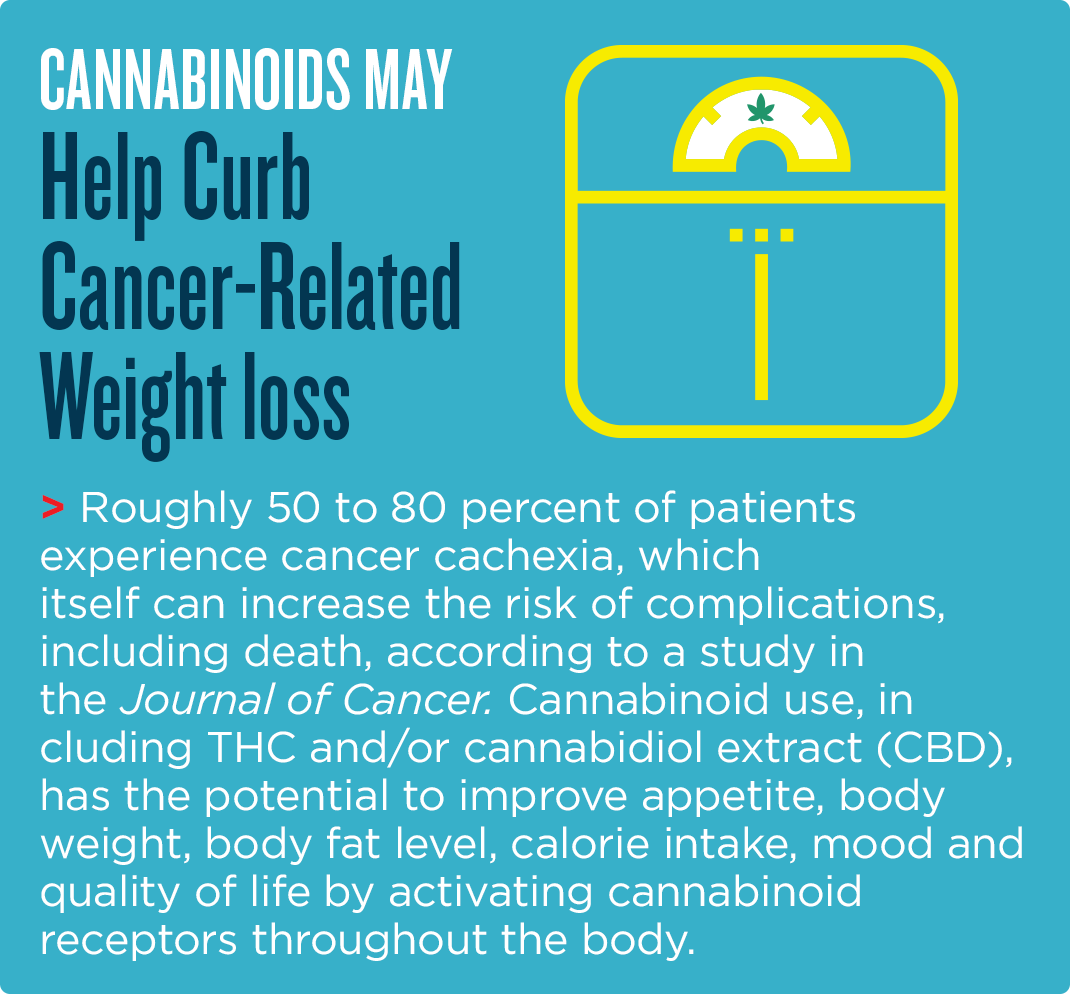 When you’re undergoing cancer treatment, cancer cachexia–muscle wasting and extreme weight loss–can be a big issue. Roughly 50 to 80 percent of patients experience cancer cachexia, which itself can increase the risk of complications, including death, according to a study in the Journal of Cancer.

Studies involving dronabinal to prevent cancer-related wasting, however, had mixed results. In one study, 469 patients with advanced cancer and weight loss, received 2.5 milligrams of oral THC twice daily, 800 mg of oral megestrol daily (a conventional medication for cancer related cachexia derived from the hormone, progesterone), or both. The researchers concluded that dronabinal didn’t promote appetite or weight gain better than megestrol acetate alone.

But a more recent study found that cannabinoid use, including THC and/or cannabidiol extract (CBD), has the potential to improve appetite, body weight, body fat level, calorie intake, mood and quality of life by activating cannabinoid receptors throughout the body.

No studies have been published exploring the effect of inhaled cannabis on appetite in cancer patients, according to the National Cancer Institute. 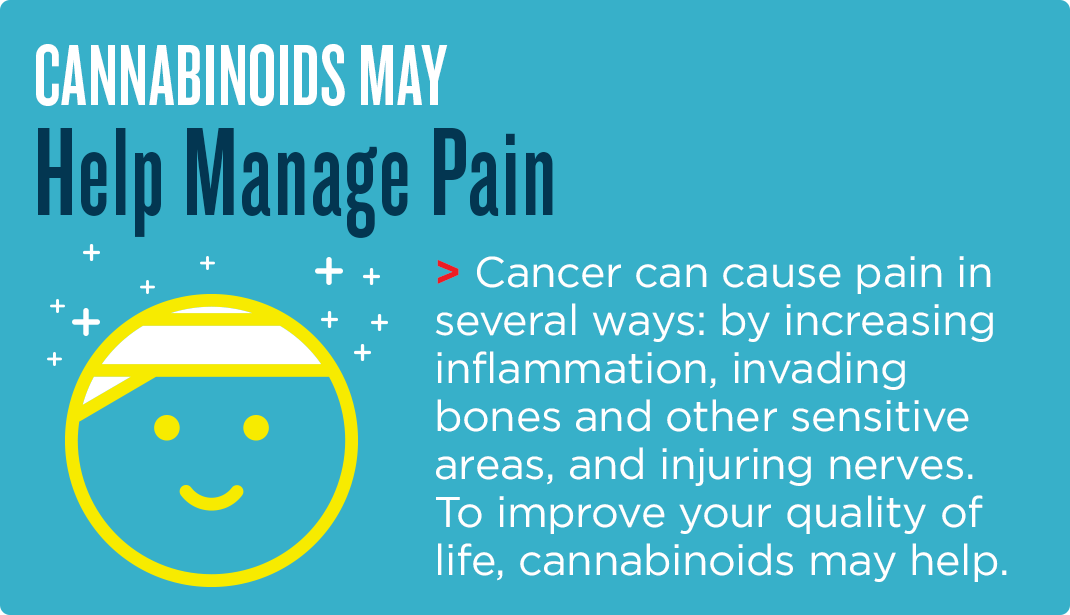 Cancer can cause pain in several ways: by increasing inflammation, invading bones and other sensitive areas, and injuring nerves. Cannabinoids may help improve quality of life in patients suffering from cancer pain.

Cancer can cause pain in several ways: by increasing inflammation, invading bones and other sensitive areas, and injuring nerves. To improve your quality of life, cannabinoids may help.

In a study involving 43 patients, the oral spray nabiximols (Sativex) relieved cancer pain for up to five weeks of use. Some patients may continue to experience pain relief with even longer use, without increasing their dose. Sativex,  a whole-plant extract containing THC and CBD in a one-to-one ratio, is in clinical trials in the US but has not been approved for use in this country. 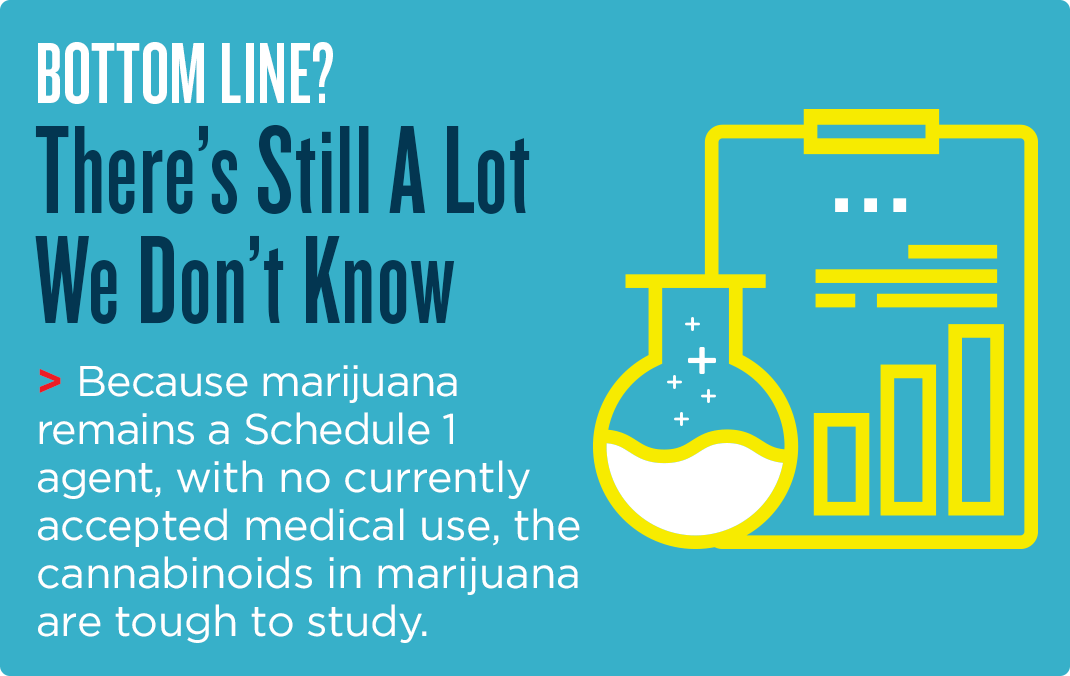 Because marijuana remains a Schedule 1 agent, with no currently accepted medical use, the cannabinoids in marijuana are tough to study. Cancer treatments are constantly evolving too. But what we know for sure is that before adding a cannabinoid to your cancer treatment plan, including medical marijuana and/or CBD, it’s important to talk with your doctor. If possible, you want to make sure CBD or medical marijuana won’t make the cancer drugs you’re already taking more toxic or less effective.

Similarly, if you’re undergoing cancer treatment and you continue to have pain and/or cachexia, ask your doctor about adding dronabinol or nabilone to your therapy and what to expect. Prescription cannabinoids can cause side effects, so it’s important to know how they might make you feel, and what to do if they make you feel worse rather than better. The American Cancer Society also suggests having someone with you when first taking these drugs or after changing your dose in case they make your symptoms worse or cause a reaction you didn’t expect. 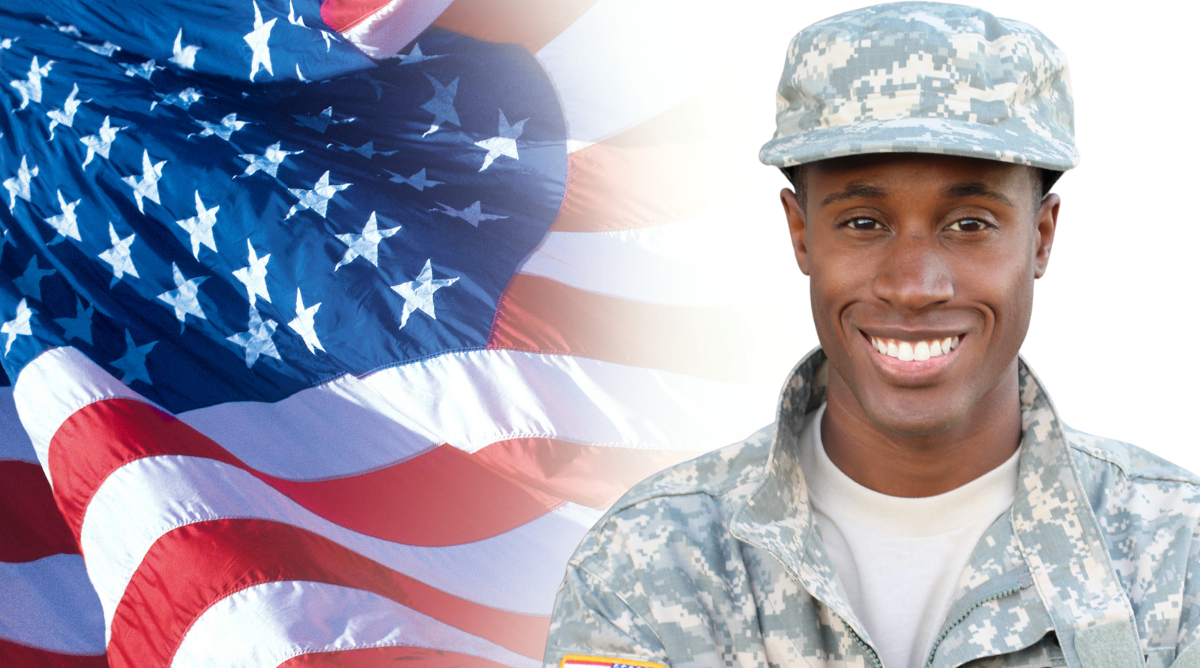