Marijuana, also referred to as weed, pot, cannabis, bud and grass, derives from the buds and leaves of the cannabis plant. The medicinal practices of the plant go back for centuries. Scientists and doctors are now studying medical marijuana for endometrial cancer, which could be a great alternative treatment for this cancer.

What Is Endometrial Cancer?

Since it often produces abnormal bleeding in the vagina, doctors can detect it early when women seek help. When the cancer is discovered early, doctors often remove the uterus.

There are certain risk factors that increase a woman’s risk of developing endometrial cancer, including:

If any of these apply to you, it’s beneficial for you to make an appointment with your doctor to get a screening.

There are various types of endometrial cancer, each varying in behavior and the treatment that will work best to manage it. Some types of uterine cancer include:

Health professionals define endometrial cancer as any uterine corpus invasive neoplasm. Around 15 percent of all women’s cancers are pelvic organ invasive neoplasms, Medscape reports. Out of these malignancies, uterine cancer is the most common.

In the U.S., endometrial adenocarcinoma is the most common form of gynecologic malignancy. Because the majority of women present at an early stage, it has had a favorable prognosis, resulting in only four percent of cancer deaths in women.

Around nine percent of uterine corpus is uterine sarcomas, but it has a poorer prognosis and aggressive behavior. Out of all types of cancer, endometrial cancer represents the fourth-most common among females, after lung, breast and colorectal cancer.

There are both physical and mental effects of endometrial cancer.

Endometrial cancer signs and symptoms may include:

Endometrial cancer may spread locally, including to other uterus parts. It could also regionally spread to neighboring lymph nodes. Your regional lymph nodes are located in your pelvis and along your aorta, the primary artery that runs along the back of your pelvis and abdomen down from your heart. Para-aortic nodes is another term for these aortic lymph nodes.

Additionally, endometrial cancer may even spread to your upper abdomen, intestines, distant lymph nodes and omentum, the big fatty sheet of abdomen tissue that drapes over your intestines, stomach and other organs like your bone, liver, lung and brain, much like an apron.

When you first receive your endometrial cancer diagnosis, all of the information the doctor gives you at that time may feel overwhelming. You’ll likely have decisions to make, struggle with unanswered questions and may not understand certain information. All this happens at once, which can leave you flustered.

Along with physical effects, you may also have emotional, mental and social consequences after receiving your endometrial cancer diagnosis. These effects may include:

Patients often have difficulty expressing how they feel to the people they love. Fortunately, medical marijuana can offer relief for some of these emotional and mental effects.

Statistics for endometrial cancer according to the American Cancer Society, include: 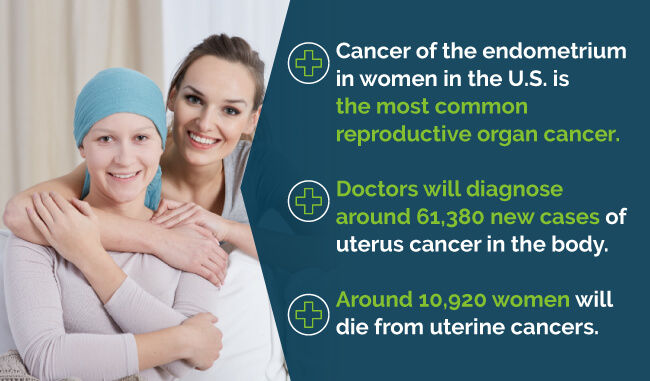 Current Treatments Available for Endometrial Cancer and Their Side Effects

Getting a Hysterectomy to Treat Endometrial Cancer

During hysterectomy surgery, the surgeon removes part or all of your uterus, the muscular, hollow organ that nourishes your developing infant while you’re pregnant. The surgeon may also remove your ovaries and fallopian tubes.

There are a number of ways the surgeon may perform a hysterectomy, such as:

You’ll talk with your doctor about the type of procedure that’s best for your endometrial cancer case. The decision will depend on why you need the surgery and your medical history.

Cancer cells can multiply more quickly in your body than your normal, healthy cells. However, since radiation kills the growing cells quickly, it damages cancer cells more than your normal cells. This leads to the prevention of cancer cells growing and separating, which eventually causes cell death.

Fatigue and skin problems, such as irritation, blistering, itch and sunburn, are the most common side effects of radiation.

One of the most common forms of radiation therapy is external beam radiation. The doctor aims high-powered particles or X-rays from outside your body directly at your tumor. There are newer techniques that offer you more effective treatment that doesn’t damage your tissue as much. These newer techniques include:

Another type of radiation doctors use to treat cancer is proton therapy. Rather than destroying cancer cells using X-rays, proton therapy uses protons, a beam of distinctive particles. Doctors often use proton therapy for cancers close to crucial parts of the body, since it doesn’t cause as much damage to healthy tissue like other therapies.

Chemotherapy consists of cancer-killing drugs. Doctors often use it to:

If you require long-term chemotherapy treatment, the doctor will insert a thin catheter, called a central line, into a large vein close to your heart.

Chemotherapy can cause nausea, vomiting, lack of appetite and fatigue and make you prone to infection.

There are a minimum of 85 various types of cannabinoids in cannabis. Cannabinoids are the active chemicals in cannabis that provides your body with the drug-like effects. Cannabinoids treat cancer symptoms and the side effects of various therapies effectively and are available in many states for legal prescription use. Because of this, marijuana and endometrial cancer treatments are gaining popularity.

Medical marijuana is an effective alternative treatment for the pain associated with endometrial cancer and hysterectomies, as well as the harsh side effects of chemotherapy and radiation therapy. THC (the main chemical component in marijuana) is a natural antiemetic, which has been shown to help decrease the pain associated with many types of cancer and chemotherapy agents. THC can also help battle chemotherapy-induced nausea and vomiting (CINV).

Doctors knew for quite some time that medical weed alleviates certain symptoms of cancer and painful side effects that cancer treatments cause. Now that refined and concentrated cannabinoids are becoming widely available, patients looking for relief from different diseases, including endometrial cancer, are improving and expanding.

Scientists have discovered cannabinoid receptors in the spinal cord, brain and nerve endings in people’s bodies that suggest marijuana may also have a positive effect on immunity. Cancer, along with HIV, was among the first conditions where medical pot was seen to produce therapeutic effects and benefit the patient. The plant showed positive results early on for easing side effects generated by chemotherapy and other harsh pharmaceutical treatments.

Furthermore, medical marijuana has antiemetic properties. Even patients who are indecisive about using medical cannabis for endometrial cancer still acknowledge its benefits regarding nausea relief and appetite stimulation in patients with this or other cancers.

What Symptoms of Endometrial Cancer Does Medical Marijuana Treat?

Although marijuana for endometrial cancer offers direct pain relief, its euphoric impact often decreases pain awareness. In many people, weed helps with the pain, but in others, it’s more of a distraction from the pain.

Cesamet/Nabilone and Dronabinol, synthetic pill types of THC, are approved by the FDA and, at present, are being used to alleviate chemo-related nausea and vomiting. The National Cancer Institute says other cannabinoid effects include:

Best Strains of Marijuana to Use for Endometrial Cancer

Currently, many states have approved medical pot as a qualified treatment for cancer. That means your state may approve cannabis and endometrial cancer treatment to decrease the side effects of the disease.

As mentioned, medical marijuana can help treat a variety of symptoms, including:

There’s a unique effect profile for each cannabis strain and what may effectively treat one symptom for one person may not be right for another person. If you’re battling endometrial cancer, below are just some of the many strains that can help with the common symptoms of the disease, particularly appetite loss, pain, depression, nausea, and fatigue:

Cannabis for endometrial cancer comes in a variety of methods. For instance, you can use:

Health professionals don’t always advocate smoking weed, since it damages your lungs. But these other methods work well. In fact, American Nurses Association’s Marcie Mar says low-dose edibles and transdermal patches are a great method of using cannabis to receive relief from your symptoms of cancer. Topicals are another method popular for medicating, particularly in senior patients. Here’s a look at some pros and cons of these methods.

You reduce your smoke intake by vaporizing since you burn the pot at a lower temperature, decreasing the amount of tar and carcinogens you put into your body. There’s less resin buildup, keeping your teeth from becoming yellow.

Edibles are a way to consume your medical cannabis in a more fun way than the normal smoking method. It’s better for your lungs, too, with no phlegm or coughing. Brownies or other delicious weed snacks infused with cannabis oil or butter will make your mouth water.

Products like salves, lotions and creams can help reduce inflammation and ease your physical pain, according to the journal Science.

Tinctures may be a new term for you, but they’ve been around for a while and have been one of the more popular ways to get your cannabis. They’re the cannabis plant’s alcohol extractions that contain 80 of all your important cannabinoids. They’re a great way to experience psychoactive effects with minimal risk. If you receive chemotherapy, you’ll find tinctures & tonics to be a great pain, nausea and vomiting relief product.

Another method to take marijuana is to consume fresh weed leaves.  Raw cannabis is nutrient rich and not psychoactive. People consume raw cannabis in a number of ways, including juicing them into smoothies.

The Many Benefits of Using Pot to Treat Endometrial Cancer

If you are looking to find relief from symptoms of endometrial cancer and/or side effects of cancer treatments with medical marijuana, MarijuanaDoctors.com can help. We can connect you with hundreds of quality marijuana doctors across the country in all legal marijuana states and ensure you comply with your state laws.

To find your perfect strain, search for a medical marijuana dispensary or doctor. Book an appointment today and let us help improve your quality of life!