While medical marijuana can’t reverse diabetic peripheral vascular disease (PVD), it can benefit individuals with diabetes due to its anti-inflammatory properties. However, this isn’t all the herb can do. It is powerful against an array of other symptoms of PVD as well.

What Is Diabetic Peripheral Vascular Disease?

Although it’s a huge risk factor for amputation of the lower extremity, it can also lead to cerebrovascular disease in the brain or symptomatic cardiovascular disease in the heart. While we know a lot about the disease itself, assessing it and managing PVD in people with diabetes isn’t as clear and poses particular problems. As of now, there aren’t any established guidelines for caring for individuals with both PVD and diabetes.

PVD occurs when you have buildup on your blood vessel walls that leads to narrowing. Generally, those with type 2 diabetes, who are also at a higher risk of heart disease and high cholesterol, develop it. Around one in three individuals with diabetes who are over 50 years old have peripheral arterial disease, according to the American Diabetes Association. Doctors usually diagnose the condition when it causes foot and leg problems.

Diabetic patients already have an increased risk for PVD. Certain risk factors pose an even greater risk of them developing the disease. These risk factors are:

To reduce your risk of PVD, you need to take extra care of your blood vessels.

Many people with PVD don’t even know they have the disease because many times it doesn’t cause symptoms. Those who do have symptoms may experience:

Diabetes can harm your arteries. If you don’t control your diabetes well, your blood sugar levels can become too high and make your artery walls rough. Plaque, a waxy substance in the blood, can build up on your artery walls. This type of plaque has cholesterol and makes it difficult for your blood to flow through the arteries. When this happens, it limits oxygen and blood flow to your legs and arms, causing tissue damage.

A doctor can assess the impact of PVD by the presence of symptoms, its progression and excess cardiovascular episodes linked to systemic atherosclerosis. Around 27 percent of PVD patients show symptom progression over a five year period with four percent losing a limb, reports the American Diabetes Association.

In a study published in Vascular Medicine, researchers evaluated lower leg symptoms in peripheral vascular disease about mood states like depression, anxiety, and anhedonia â€” the inability to feel pleasure. Out of all participants, 29 percent had anxiety, 30 percent had depression and 28 percent had anhedonia.

Experiencing pain while resting was associated independently with depression, anxiety, and anhedonia. Individuals with atypical leg symptoms had twice the risk of anxiety.

There’s an important need to deal with depression in PVD patients, especially those who have characteristics placing them at a higher risk. Vascular care providers are typically the primary contact for initially assessing symptoms of depression. Once diagnosed, they may refer the patients to mental health providers to prevent the worsening of both PVD and depression.

There isn’t much demographic data related to PVD distribution, and most date back to the 1960s. In the 1960s, three men had PVD for every woman diagnosed, whereas now in a present study, there’s a 3:2 gender ratio.

Given the restrictions in being able to compare different populations over a period of 50 years, it’s hard to know precisely whether this signifies a genuine distribution change or a change in sampling. If it is a prevalence change, then the reasoning behind this isn’t clear but could be related to the higher prevalence of female smokers in the latter half of the 20th century.

Your doctor can help you control several of the risk factors mentioned above to reduce your chances of developing PVD and slow its progression. People with diabetes need to be particularly careful to keep their blood glucose levels as normal as they can.

Also, it’s essential to participate in regular physical activity. Your doctor may also prescribe you medications or special footwear. You can reduce your risk of stroke or heart attack and enhance your quality of life by taking the steps necessary to reduce your risk of PVD.

Individuals with PVD have a high risk of stroke and heart attack, so they need to manage their cardiovascular risk factors. The doctor will likely advise you to:

In severe PVD cases, your doctor might suggest surgery. They’ll use an arterial bypass or balloon angioplasty to reroute or open restricted blood vessels.

Clinical trials to study PAD and evaluate potential treatments include:

Cannabis can help with peripheral vascular disease complications including inflammation, diabetes, and neuroprotection.

Medical marijuana has received credit as an anti-inflammatory for a long time, and inflammation is present in people with peripheral vascular disease. In one study, however, researchers found it’s not just the psychoactive compounds responsible for its anti-inflammatory properties, but also a compound people take daily in a vegetable nutriment.

The hemp plant has more than 450 distinct compounds, with only three of them having intoxicating effects. These compounds activate the body’s CB1 and CB2 receptors. Although the central nervous system’s CB1 receptor influences perception, the tissue’s CB2 receptor plays a significant role in hindering inflammation.

Researchers have conducted studies since 2005 on medical marijuana’s benefits in patients with diabetes. The American Journal of Medicine (AJM) published a study in 2013 that quickly became the foundation for talking about medical weed’s ability to treat the disease.

Although some still doubted the effectiveness of cannabis for slowing down the onset of type 2 diabetes, the AJM’s study left little doubt cannabis was healthful and helpful for individuals diagnosed with diabetes, both type 1 and 2, as well as associated complications like PVD.

The study found current marijuana users were reporting they could metabolize their carbohydrates “better” when compared with non-users. The main finding of this research was the cannabis user’s fasting insulin levels were not just lower, but also seemed to be “less resistant” to their body’s natural insulin.

This enabled them to sustain regular blood-sugar levels, reducing their need for insulin injections in type 1 diabetes, and potentially slowing down type 2 diabetes progression by helping their body naturally manage their sugar levels.

Cannabis has “neuroprotective” effects, activating the body and brain’s receptors to help to prevent nerve inflammation and decrease the pain of neuropathy. It also works as a “vasodilator,” helping improve circulation and keep blood vessels open.

What Side Effects/ Symptoms of Diabetic Peripheral Vascular Disease Can Medical Marijuana Treat? 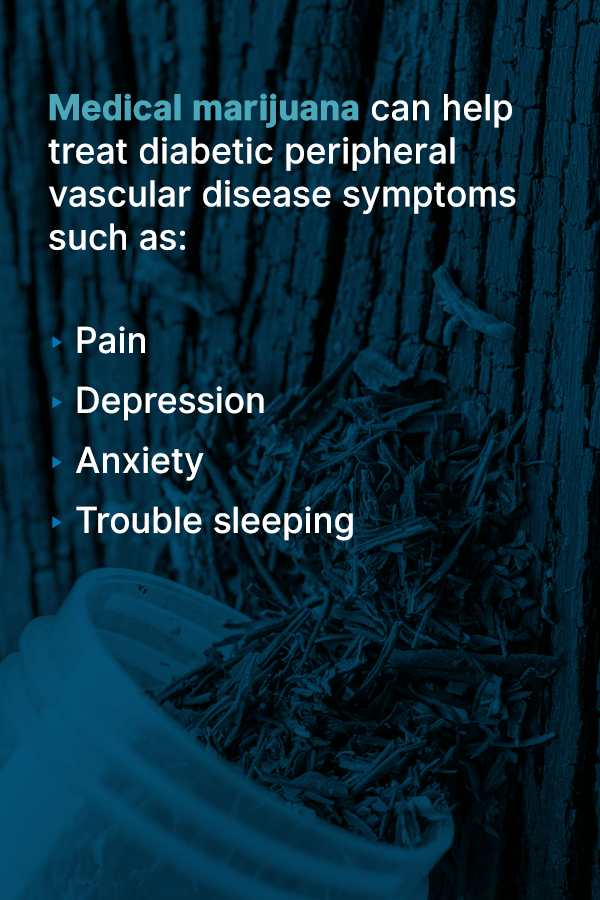 Besides potential benefits in the better metabolization of carbohydrates, less resistance to natural insulin and vasodilator capabilities, medical marijuana can help treat diabetic peripheral vascular disease symptoms such as:

The American Alliance for Medical Cannabis (AAMC), in 2005, released a report showing five main areas where cannabis was thought to help those living with diabetes. The report indicated:

Also, the AAMC stated rubs or topical ointments with CBD oil could reduce tingling sensations in the feet and hands and neuropathic pain.

There are many different kinds of medical marijuana strains you can try depending on which symptoms you most want to target.

Some suitable medical cannabis for diabetes are:

If you’re thinking about obtaining a marijuana recommendation for diabetic peripheral vascular disease, you can search the listings on MarijuanaDoctors.com for licensed and qualified marijuana doctors who understand the benefits of medical cannabis and know how well it can help with disabling symptoms of PVD and other health conditions.

You’ll also be able to book an appointment with a cannabis doctor so you can discuss your marijuana and diabetic peripheral vascular disease treatment plan, then browse the comprehensive list of dispensaries to find your cannabis products.