As a medical marijuana patient, you may have seen marijuana medicine meant for animals in a dispensary. It turns out the market for marijuana for pets is quickly growing and gives pet owners another medication option for their animal friends.

But, you probably haven’t heard as much about medical marijuana for pets as you have for humans. This can be problematic if you want as much information as possible before you decide to treat your pet with cannabis.

Here at MarijuanaDoctors.com, we advocate for comprehensive patient knowledge to ensure an informed medical decision. If you worry about the ethics behind treating pets with marijuana, where should you go? We’ll go over PETA’s viewpoint on medical marijuana to give you a better idea.

Before we dive into PETA’s official opinions, it helps to have a basic understanding of how we use medical marijuana for pets. We have another post detailing the subject, but we’ll give you the short version here.

Medical marijuana card holders can get cannabis medicine for their pet from the same dispensary where they buy their own medicine. Dispensaries in states that allow recreational marijuana usage sometimes sell pet medicine, too.

When used correctly, medical marijuana can treat a wide variety of conditions for all sorts of animals. Similarly to humans, pets benefit from pain relief, less anxiety, reduced nausea, appetite issues and seizures. We have the most information about medical marijuana use for cats and dogs, but we’re starting to learn about its effects on other animals, too.

If you want to give your pet medical marijuana, make sure to read the linked post, this post and any other online sources you can find on the subject. Understanding how marijuana affects pets can help you give your furry friend the best treatment possible. In addition, talk to your pet’s veterinarian about pursuing cannabis medicine.

What PETA Has to Say

People for the Ethical Treatment of Animals, or PETA, is a well-known animal rights organization. It’s the largest in the world, with more 6.5 million members and supporters. They nationally advocate for the rights of all animals, specifically tackling the areas of the food industry, the entertainment industry, clothing production and laboratory testing.

PETA has worked for animal rights for more than 35 years. During that time, they’ve convinced numerous industries and corporations to conduct business in a way that considers animals’ rights. They have also converted their supporters to a vegan diet and lifestyle they believe reduces cruelty against animals.

In other words, PETA is a leading voice in the animal rights movement. If you take a cruelty-free approach to your lifestyle, their moral stances can help inform your opinions on animal rights issues. Even pet owners who don’t advocate on PETA’s level can learn facts from their information.

However, keep in mind that like any other source, you shouldn’t entirely rely on PETA for your knowledge about animal rights issues. Using as many reputable sources as possible gives you a more holistic view on issues like medical marijuana. That being said, let’s see how PETA’s opinion on medical marijuana for pets has evolved over the years.

Every now and then, marijuana will take the front stage during the daily news. At times when this has happened, PETA has stepped in to make their opinion known — say no to pot roast! They put up billboards with the punny slogan any time there’s a big buzz.

When compared with the legalization and usage of marijuana, PETA seems to worry more about the consumption of meat. They just use the opportunity to advocate their beliefs. In fact, they even argue that meat consumption is unhealthier than marijuana consumption.

Events that have motivated PETA to use the billboard design include Michael Phelps’ marijuana controversy and the Florida vote for state weed legalization.

The attendees at Los Angeles’ 2011 HempCon medical marijuana convention included vendors, doctors and… PETA? PETA joined in on the fun to spread awareness about veganism and give out vegan snacks.

PETA’s Lettuce Ladies, a group of their public-facing advocates, promoted PETA’s values at the convention. They pointed out that vegetarians have a 40% lower chance of getting cancer, one of the diseases most commonly treated with medical marijuana.

In a guest blog post for PETA, Dr. Amanda Reiman explained how medical marijuana helped her cat Monkey pass away from cancer in peace. As a policy manager for the Drug Policy Alliance in California, she knows the ins and outs about drugs and their regulations.

Her beloved cat, Monkey, received a diagnosis for intestinal cancer. Since the tumor was inoperable, there was no way to cure it. So, Dr. Reiman looked for a way to make Monkey’s last days on earth as pleasant and comfortable as possible.

Dr. Reiman chose medical marijuana treatment for her cat. When she put a small dose of cannabis oil in Monkey’s wet food, Monkey became very playful and energetic. While it didn’t prevent Monkey’s death, she was able to live out the rest of her life happy.

To end her story, Dr. Reiman argues that medical marijuana legalization is an animal right, too. She believes the legal development of marijuana medicine for animals could revolutionize pet health as we know it.

The Verdict: Not Against Weed, But Not an Active Advocate

Looking at these examples of PETA campaigns and marketing, it seems they worry more about major animal rights issues than forming an opinion about marijuana. While PETA crosses paths with legalization advocates often, they have a relaxed approach to the situation. 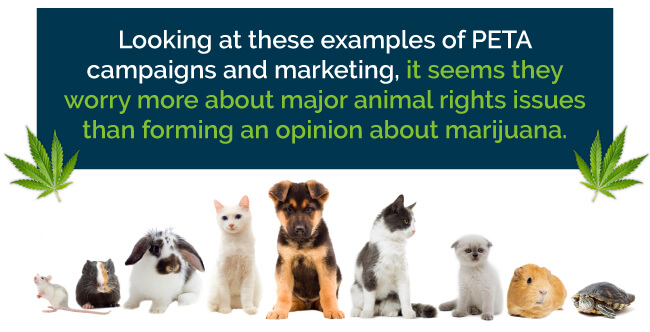 The only time PETA mentions the topic of medical marijuana for pets is in Dr. Reiman’s post. This suggests they gladly provide a platform for informed advocates to talk about marijuana issues. However, they haven’t taken an official stance on the subject as a company.

You want the absolute best for your furry family member.

What If Your Pet Eats Cannabis?